Something wonderful has happened. The Australian Competition and Consumer Commission is taking legal action against Homeopathy Plus for it’s anti-vaccination claims.

The Australian Competition and Consumer Commission has instituted Federal Court proceedings over allegedly misleading claims on a homeopathy website regarding the effectiveness of the whooping cough (pertussis) vaccine.

The claims on the Homeopathy Plus! website include statements that the whooping cough vaccine is “unreliable” and “largely ineffective” in preventing whooping cough and that homeopathic remedies are a safe and effective alternative for the prevention and treatment of whooping cough.

The ACCC alleges that these claims are misleading and deceptive, in breach of the Competition and Consumer Act 2010.

The ACCC is seeking an injunction to have the claims removed, as well as penalties against the company and individuals.

Whooping cough is a highly infectious respiratory disease which is most serious in young children. The Australian Government Department of Health and Ageing recommends children receive the whooping cough vaccine as part of routine childhood immunisation. –ACCC Public Release 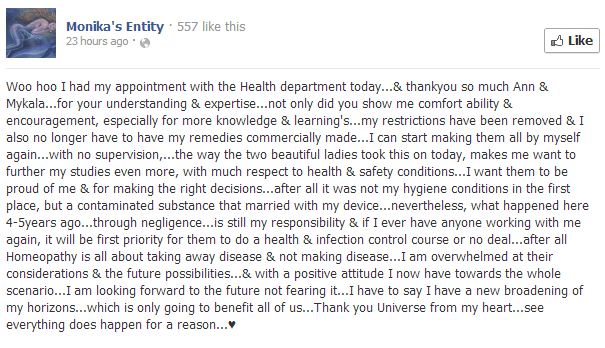 As unbelievable as it sounds Monika Milka, a fraudster based in South Australia has had restrictions lifted by the state’s health department. Milka first came to my attention in May last year when I discovered that she was being sued by some of her victims.

AN alternative therapist is being sued by nine people who say they were injected with a bacteria.

Then there was the parlimentary inquiry;

Under the provisions contained in the Public and Environmental Health Act 1987, the Department of Health seized samples and equipment from the premises and ordered that the procedure no longer be undertaken by the therapist at the centre of its investigation

Concerned that this potentially dangerous treatment would continue to be undertaken, the Committee wrote to the Department asking how the public will be protected from this practitioner administering this treatment in the future. In reply, the Department advised the Committee that it would ‘continue to monitor and enforce the standards required under the Public and Environmental Health Act 1987.’

Yet, despite this Monika Milka is now being allowed to continue committing fraud (i.e sell non-existent tratments). I can only hope she doesn’t kill someone.