Vaccination is the equivalent of child rape. At least according to Meryl Dorey of the Australian Vaccination Network. Just when it seems that the Anti-vaccination crowd couldn’t get more absurd. The AVN and it’s supporters appear to excel in all area’s of stupidity. 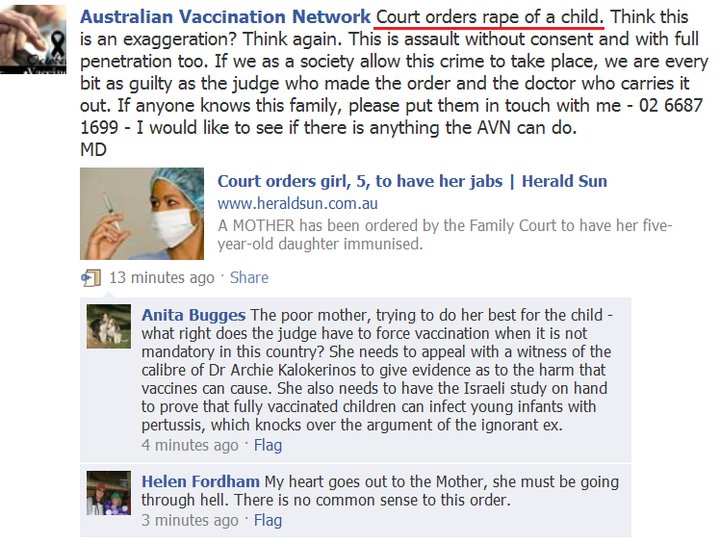 A MOTHER has been ordered by the Family Court to have her five-year-old daughter immunised.

The girl’s father, who has remarried and has another child, wanted the girl vaccinated against preventable diseases for her own wellbeing, and for the health of his other children.

But the girl’s mother said her daughter was healthy and the risk of vaccine-preventable diseases was very small.

The couple separated before their daughter was born, and the father initially consented to her not being immunised because, he claims, he was desperate to establish a relationship with his daughter. But the father now wants her vaccinated and produced medical evidence that immunisation provided no unacceptable risks for his daughter. –Herald Sun

It’s a good thing the father of this child took the mother to court to get this resolved. It can’t have been easy but at least it is one more life that may now be protected from preventable disease. Parents who refuse to protect their children from disease are unfit to raise kids. It’s ashame the father wasn’t awarded full custody, one step at a time I guess.

3 thoughts on “Vaccination is the equivalent of child rape.”