One of the downsides of following issues of science denialism is that you often have to encounter the very worst of our society. There are allot of unpleasant characters out there who take advantage of people either for some quick cash or to back an ideology.

Stephanie Messenger is one such individual. She has written a book titled Melanie’s Marvellous Measles where she glorifies childhood disease. To make matters worse the book is intended for children, to tell them that disease is a good thing. 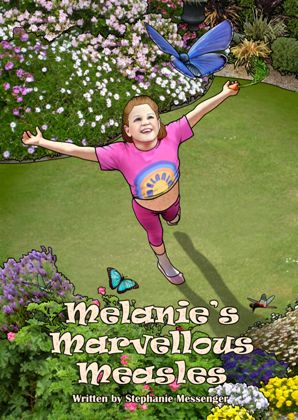 This book takes children aged 4 – 10 years on a journey of discovering about the ineffectiveness of vaccinations, while teaching them to embrace childhood disease, heal if they get a disease, and build their immune systems naturally. –Book Description

Meanwhile the World Health Organisation has this to say about Measles:

Measles is a highly contagious, serious disease caused by a virus. In 1980, before widespread vaccination, measles caused an estimated 2.6 million deaths each year.

It remains one of the leading causes of death among young children globally, despite the availability of a safe and effective vaccine. An estimated 164 000 people died from measles in 2008 – mostly children under the age of five. –World Health Organisation

Yet, people like Stephanie Messenger openly advocate Measles for children. Messenger is not a doctor, knows nothing of medicine and yet she tells children that disease is good for them. Contrary to the overwhelming consensus of the medical community.

Stephanie Messenger is an inhumane child disease advocate. It is sickening that people like her exist, but unfortunately they do and those of us who see these people with their true colours have a moral obligation to shine the spotlight on them.