The NSW Parliament has just released it’s final report into: The promotion of false and misleading health-related information and practices.

That the Committee on the Health Care Complaints Commission inquire into and report on possible measures to address the promotion of unscientific health-related information or practices which may be detrimental to individual or public health. The Inquiry will focus on individuals who are not recognised health practitioners, and organisations that are not recognised health service providers.

The Committee will have particular regard to:

(a) the publication and/or dissemination of false or misleading health-related information that may cause general community mistrust of, or anxiety toward, accepted medical practice;

(b) the publication and/or dissemination of information that encourages individuals or the public to unsafely refuse preventative health measures, medical treatments, or cures;

(c) the promotion of health-related activities and/or provision of treatment that departs from accepted medical practice which may be harmful to individual or public health;

(d) the adequacy of the powers of the Health Care Complaints Commission to investigate such organisations or individuals;

(e) the capacity, appropriateness, and effectiveness of the Health Care Complaints Commission to take enforcement action against such organisations or individuals; and

(f) any other related matter.

This is political speak for “How can we stop these frauds and crimminals from harming the community”. It should come as no surprise that the usual suspects have come out spitting venom. Here is one such example:

The Australian constitution and High Court precedents already protect the right to speech provided it is not defamatory,slanderous or inciting hatred (there are several government ministers who would fall foul of these laws were they to speak in public the way they do under parliamentary privilege!) so the Committee should be forewarned that any attempt to take away rights protected by these legal precedents will be swiftly followed by legal action by those who fight to protect freedoms which are considered to be inalienable.

It seems that the HCCC isn’t so much lacking in power as they are lacking in the will to perform the job Parliament set them. Giving them yet more power over private citizens and their ability to speak and communicate as they see fit would be an act of bastardry which no democratically elected government should ever consider.

I find it laughable that a person who spend nearly a year in court trying to silence he critics should resort to the Free Speech defense when being investigated by government regulators. See: Dorey vs Buzzard and Dorey vs Bowditch

We are deeply concerned that the proposal may give the HCCC powers to regulate free speech. Australians enjoy freedom of assembly, speech and expression, and this includes the freedom to discuss any health-related issues wherever, whenever, and with whomever they choose. The right to these freedoms is internationally recognised and guaranteed. That the Committee is considering curtailing them suggests a disrespect of this core value of democracy.

Greg continues to make a fool of himself by trying to address terms e and f:

(e) the capacity, appropriateness, and effectiveness of the Health Care Complaints Commission to take enforcement action against such organisations or individuals;

Capacity: The HCCC has sufficient powers to perform the role for which it was created. We strongly oppose granting powers which extend this role in the direction of censorship.

Effectiveness: The HCCC was not created to censor free speech and therefore is not currently effective in this pursuit. That is as it should be. No such powers should be given to any government agency for the purpose of censoring free speech.

(f) any other related matter.

The AVN is itself the subject of ongoing HCCC investigation and attempted suppression, and has been for several years. The HCCC’s initial investigation of the AVN was ruled unlawful by the NSW Supreme Court in February 2012. The scope of the Act was subsequently changed by Parliament for the express purpose of continuing the pursuit of our organisation.

I’m not an expert on Parliament Submissions, but common sense would tell most people to leave out the part where they are constantly running afoul of the existing regulations. It’s like a career criminal arguing that the police should not have power of arrest and then basing the argument on the fact that they haven’t caught him yet, despite a lengthy pursuit.

Journalists are renowned for their failure to check facts. So it should come as no surprise that a journalist in Australia has mistaken a sewer vent for a war memorial. 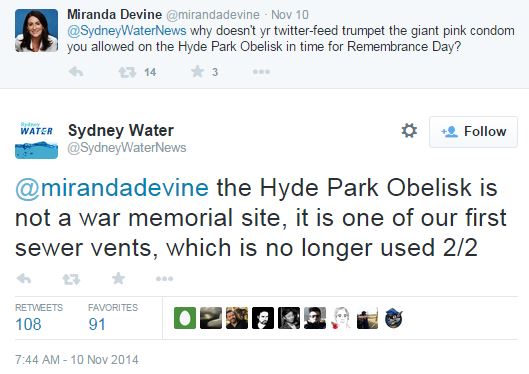 I’m unable to find permanent employment as a journalist due to lack of qualifications (at least that’s what they tell me). Yet, I always check my facts before making stupid comments. Especially when a quick Google search is all you need to find the fact sheet on The Obelisk.

Anyone can make a mistake, but this is just laziness.