The left-wing of the political spectrum no longer believes in the fundamental right to freedom of speech or civil discourse, nor does it tolerate differences of opinion. The left has become fascist and authoritarian in nature. But it wasn’t always like this, just five years ago things were very different.

Needless to say both events attracted controversy from religious conservatives who view any criticism of their ideology as “hate speech” and an “attack” on morality. In the world of a deeply religious conservative nobody can challenge the authority of a magic sky fairy so it comes as no surprise that atheist websites have come under denial of service attacks as the perpetually offended attempt to silence their opponents.

It was only 10 years ago that The Australian Government attempted to introduce a “cleanfeed” mandatory internet censorship similar to that used in China as a way of ensuring the population can only access approved speech.  This was of course widely supported by religious organisations at the time, and strongly opposed by the left of the political spectrum on the ground that “offensive speech” is Free Speech and simply offending another persons sensitivities was not sufficient grounds to suppress speech.

It’s been said that the best antidote to bad speech is more speech, not less. This is an idea that appears to have become lost on the left side of politics in recent years. Now the left-wing of the political spectrum will not hesitate to attack any service provider that dares stand up for the freedom of speech. 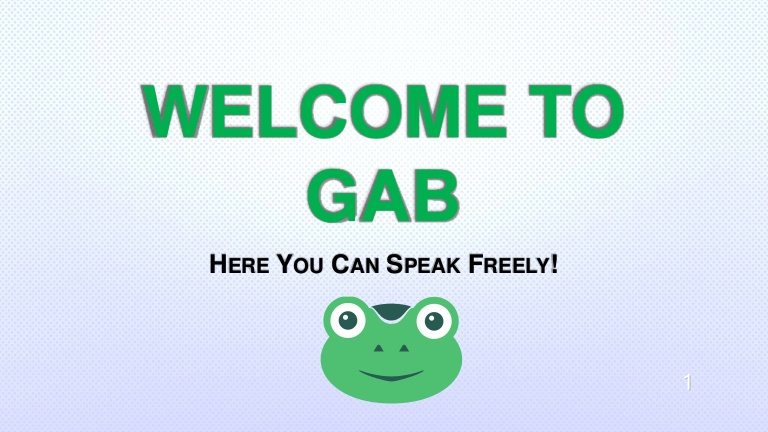 Recently the social media platform GAB.com was shutdown by its hosting provider as a result of the actions of one of its users.

A Twitter-rival used by the man accused of a gun attack on a US synagogue has gone offline after several technology services withdrew support from it.

Gab describes itself as a defender of “free speech and expression” with nearly 800,000 users.

It has faced criticism in the past for providing an outlet for far-right figureheads and conspiracy theorists banned from other social networks.

The service has said it has “zero tolerance” for terrorism and violence.

It has, however, acknowledged that a verified account whose details matched those of the alleged Tree of Life Synagogue shooter had been active on its service. –BBC

Although GAB.com had no involvement in the crime and explicitly disavows violence and terrorism they were still punished for the actions of one of their users and have been continuously slandered by in the media.

After being offline for a few days GAB.com is now back online after finding a service provider that respects freedom of speech. 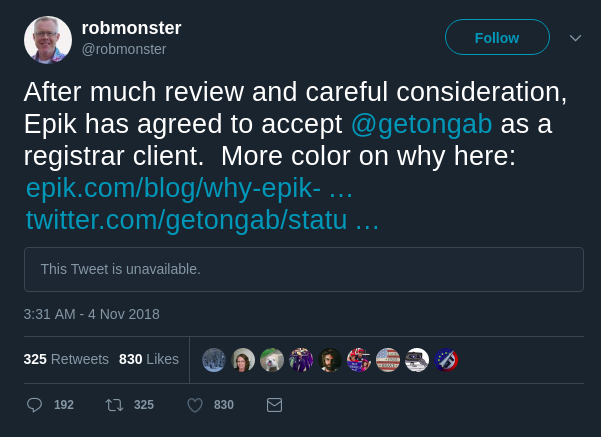 For those not familiar with the case, Gab.com’s ability to operate was abruptly terminated by Godaddy, among other vendors, who deemed Gab to have violated their terms of service. This de-platforming of Gab generated much discussion in the mainstream technology press. It also prompted a lively discussion in the professional domain name community, including at the popular discussion board NamePros.

As the news broke, and as some elements in the mainstream media rendered their judgement, I embarked on my own search for truth. Along the way, I did have an opportunity to meet with the Founder of Gab, Andrew Torba, an entrepreneur who was willing to swim against the tide for what he believes is right, namely empowering netizens to discuss openly about matters of mutual interest with limited risk of censorship.

Although, I did not take the decision lightly to accept this domain registration, I look forward to partnering with a young, and once brash, CEO who is courageously doing something that looks useful. As I reflect on my own journey as a truth-seeking tech entrepreneur, I have no doubt that Andrew will continue to develop not only as tech entrepreneur but also as a responsible steward — one that can balance bravado with diplomacy and who tempers courage with humility. –Epik, statement on GAB

However this hasn’t gone down well with authoritarians who seek to punish service providers for taking on a customer who’s users may post unpleasant things onto the platform. 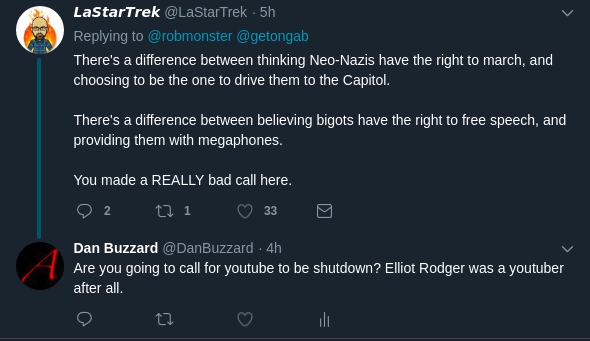 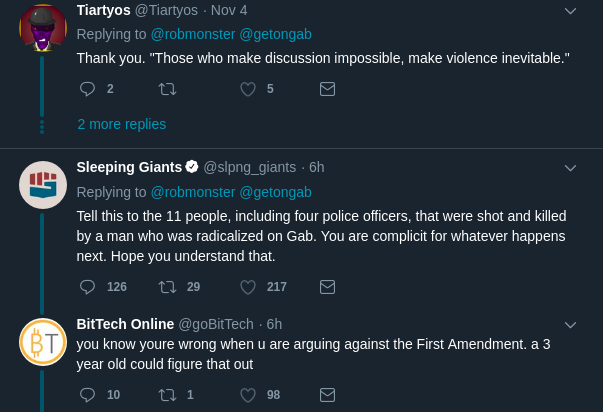 While GAB is being unfairly singled and slandered as a “haven for hate” Twitter, Youtube and Facebook are left untouched by the censors. Here is an example of hatefull speech that can be found on Twitter: 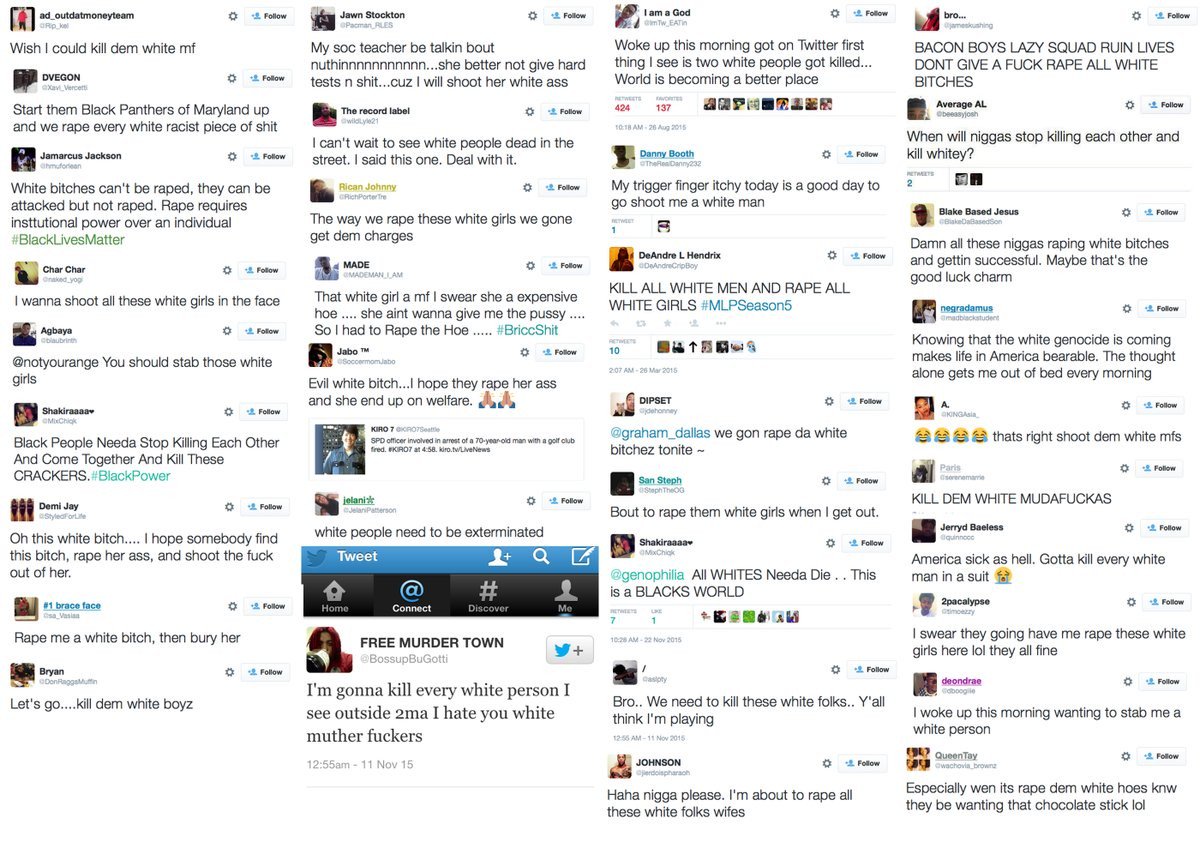 However I don’t see many calls for Twitter to be shut down as a result of what any of it’s users post. In 2014 Elliot Rogers a Youtuber went on a killing spree.

Santa Barbara County Sheriff, Bill Brown, said at a press conference on Saturday the video, posted on YouTube and titled Elliot Rodger’s retribution, “appears to be connected with this crime”.

In the six-minute video, the young man who identifies himself as a student in Santa Barbara, says: “This is my last video, it all has to come to this. Tomorrow I will have my revenge against humanity, against all of you”. –Sydney Morning Herald

Yet, I see no calls for YouTube to be shutdown and no accusations of Google being complicit in this crime. If we society determines that service providers be accountable for the actions of their users, the same rules must eventually be applied to all service providers.

My position has always been that technology is politically neutral. We don’t punish the phone company when someone makes a drug deal over the phone, or the post office when the drugs are shipped via their service. Therefore we should not be seeking to punish service providers for the action of their end users. The inevitable result of punishing a service provider for speech you don’t like is widespread totalitarian censorship of the Internet. Something the left used to oppose.