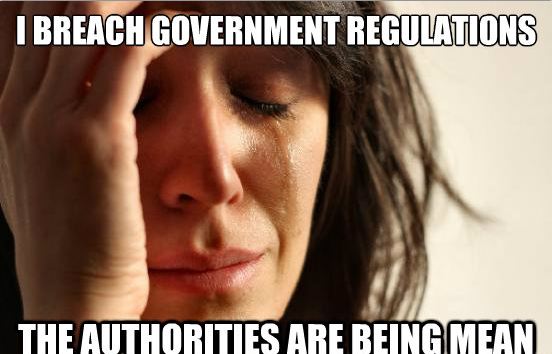 The Australian Vaccination Network sent out a very entertaining newsletter this morning complaining about the NSW Department of Fair Trading being meanies. The anti-vaxxers clearly think it’s unfair that a government regulator should be targeting them for repeatedly breaking the law.

This newsletter is of particular interest because it provides a breif insight into the actions being taken against the Australian Vaccination Network. Although I am following the activities of this organisation very closely it’s easy to lose track of all the investigations being conducted by the various government departments. So it’s nice of the anti-vaxxers to provide a summary:

Since winning our case against the Health Care Complaints Commission (HCCC) in April, 2012, the AVN has been subject to numerous investigations by various NSW and Federal Government bodies. These investigations have all been instigated by members of the hate groups the Australian Skeptics and their splinter organisation, Stop the AVN (SAVN).

The complaints have resulted in the following investigations from these government bodies over the last 10 months alone:

This adds up to a total of at least 8 complaints over a 10 month period (one every 5 weeks) which we have had to respond to. There are dozens more that have been sent by these groups which are waiting in the wings for processing.

I’m pleased to announce that at least one of those investigations was because of me, no doubt there are going to be more in the future. The Australian Competition and Consumer Commission is one I would like to see added to the AVNs list of opponents.

Over the same period of time, threatening phone calls which were made to the home of then-President of the AVN, Meryl Dorey. Police determined they originated from the private phone of Mr Daniel Raffaele, founder of SAVN and an active member of the Young Australian Skeptics. Despite a sympathetic police force, nothing was done to charge Mr Raffele for these criminal activities. We believe the NSW DPP instructed police not to press charges against Mr Raffaele.

No, the Police could only press charges if the accusations were correct. So far I have yet to see any evidence to support the accusations against Mr Raffaele. Given that the accusation comes from a person of ill-repute it’s not a surprising outcome.

In our estimation, the cost to taxpayers of the investigations into both the AVN and Ms Dorey would have to run into the millions of dollars and yet, there has been no justice or equity from within this same system for Ms Dorey or the AVN. The law seems to have been very selective in dealing with these issues.

For example, Mr Ken McLeod is one of the most aggressive of the attackers from SAVN and possibly the biggest money-waster. He was the original complainant to the HCCC, leading to a 2-year ‘investigation’ of Ms Dorey and the AVN which culminated in the HCCC’s loss in the Supreme Court with costs awarded to the AVN.

Except that’s not all that happened. The result of Mr McLeod’s complaint was the issue of a Public Warning. It was at a much later date that the AVN managed to challenge the HCCC’s jurisdiction based on a technicality.

It’s especially interesting to learn that the AVNs definition of an “Aggressive Attacker” is a man acting entirely within the law. The fact that this organisation fails to recognise a law abiding citizen when it sees one is of no surprise.

Last year, Mr McLeod filed a GIPA (Freedom of Information Claim) with the Department of Fair Trading. He has requested the names, occupations and addresses of those who serve on the AVN’s Management Committee.

Due to a long history of harassment and threats by members of SAVN towards those who support the AVN (these actions have included but not been limited to hacking of websites, posting violent pornography to homes and via email, threatening phone calls and calls to employers), Committee members asked that their personal identities be protected.

More lies, the AVN website was hacked but not by SAVN or anyone associated with them. It was a random drive-by exploit (Possibly SQL Injection) used by spammers to promote their wares. It came about as a result of the AVN’s technical incompetence, not the organisations critics.

I was in the process of writing a complaint to the Australian Privacy Commissioner regarding the website hack. The AVN continued to solicit personal information from people despite being aware of the security breach. Unfortunately they fixed the site just before I finished off my complaint.

The other accusations appear to be just a dubious as the hacking accusation. Nobody from SAVN is responsible for posting pornography, or sending threatening emails. SAVN and it’s supporters actively stand against such activities and operate within the law. Persons engaged in unlawful activities are unwelcome. There is no legitimate reason to try and keep the committee membership secret.

We followed the necessary procedures…

There is currently an action before the Administrative Decisions Tribunal of NSW (ADT) regarding Mr McLeod’s GIPA request. On the 8th of November, 2012, the Information Commissioner wrote an advice to the ADT on this matter stating (amongst other things) that:

“The GIPA Act provides that there is a consideration against disclosure of information if disclosure could reasonably be expected to “expose a person to a risk of harm or of serious harassment or serious intimidation” (clause 3(f) of the table to s14(2) of the GIPA Act).”

At the time of this advice being received, the AVN’s solicitor was informed that a decision would be made by the ADT around the 30th of November, 2012. As of today, the 22nd of February, 2013, we are still awaiting their decision.

The Department has now given us until the 22nd of February to release the details of our committee members to them or face fines and potential closure of our volunteer-run organisation. We had asked them to await the result of this ADT decision since it could affect the outcome of this decision but at 5:17 PM last night, one day before the deadline, they refused and have demanded that we provide them with the names of our committee members.

Today, the AVN is seeking legal advice and is considering an application in the courts for an injunction to stay the Department’s draconian treatment of our organisation.

A court injection to keep the authorities from busting you? Imagine if a criminal tried taking out a restraining order against the police to avoid being arrested. I am sure this injunction will fail just as hard.

The law must not only be fair – it must be seen to be fair and in this case, the government departments that have been dealing with us for the last 4 years have been anything but fair.

The Management Committee of the Australian Vaccination Network, Inc.

So in summary. Law abiding people and government regulators are mean to those acting outside the law. Perhaps they should be asking their supporters to donate boxes of tissues.