Last Wednesday the Australian Vaccination Network sent out a newsletter containing the usual lunacy about government conspiracies. Of course they are right about the conspiracy, a lot of people really are working to have them shut down.

The Health Care Complaints Commission (HCCC) was originally set up to protect the public from dangerous health practitioners. They were to be an independent overseer that could adjudicate whenever there was a question of someone being harmed by treatments – an all-too common event in Australia. According to their website, they describe themselves as being: “an independent body to deal with complaints about health service providers in NSW.”

Yes Meryl, that is precisely why they are working to have you shut down. They have already received the complaints and now they are acting on them.

The HCCC can truly be said to be above the law in NSW. To the best of our knowledge, it is one of only two bodies in the country which are not subject to subpoena (a court order to produce documentation) or Freedom of Information (called GIPA in NSW) claims. The other organisation is the Australian Crimes Commission. These exemptions mean that the HCCC is able to operate in secret should they wish to do so.

Without even Googling I can confirm that ACMA, ASD and ASIO are also exempt from Freedom of Information requests. Even departments without exemption still have the right to refuse disclosure of sensitive information. But of course in loon-town that means it must be some massive government conspiracy.

But these powers were obviously not enough because after 2012, it appealed to the NSW Parliament for a virtual blank cheque to  investigate, cite and punish the AVN and any other organisation or individual who goes against government health policy. Now, not only can they choose to investigate any complaint from anyone about our group or others, even if they have never dealt with or been harmed in any way by these organisations or individuals – the HCCC can also file their own complaints and then, investigate and adjudicate them. Judge, jury and executioner – that is the power Parliament granted to the HCCC – all to ‘get’ the AVN.

The police don’t have to receive any complaint in order to arrest a person for breaking the law. Imagine how stupid it would be if the police could only arrest a lawbreaker after someone lodged an official complaint. Of course stupid is the AVNs way of thinking.

Then on Friday the AVN sent out another newsletter. To sell office equipment:

In addition, I am just getting photos done now but just giving you a head’s up that we will be selling off filing cabinets, computers and other office equipment. If you are in the market for some really good quality gear at a great price, please keep your eyes open and wait for our next newsletter.

When a company starts getting rid of it’s office furniture it usually means one thing. So this is a very promising newsletter. Immediately following was the reason for the sale.

The long-awaited decision of the Administrative Decisions Tribunal (ADT) will be handed down on Monday, November 25th in Sydney. As you probably remember, the Department of Fair Trading via the Minister for Fair Trading has demanded that the Australian Vaccination Network change its name. We have appealed against that decision and will hear the result of that appeal next week.

It seems strange that a furniture sale should come before mention of the court case. But then Meryl Dorey always did make money her number one priority. So to celebrate the AVNs impending doom myself and Peter Bowditch enjoyed a beer in the pub. 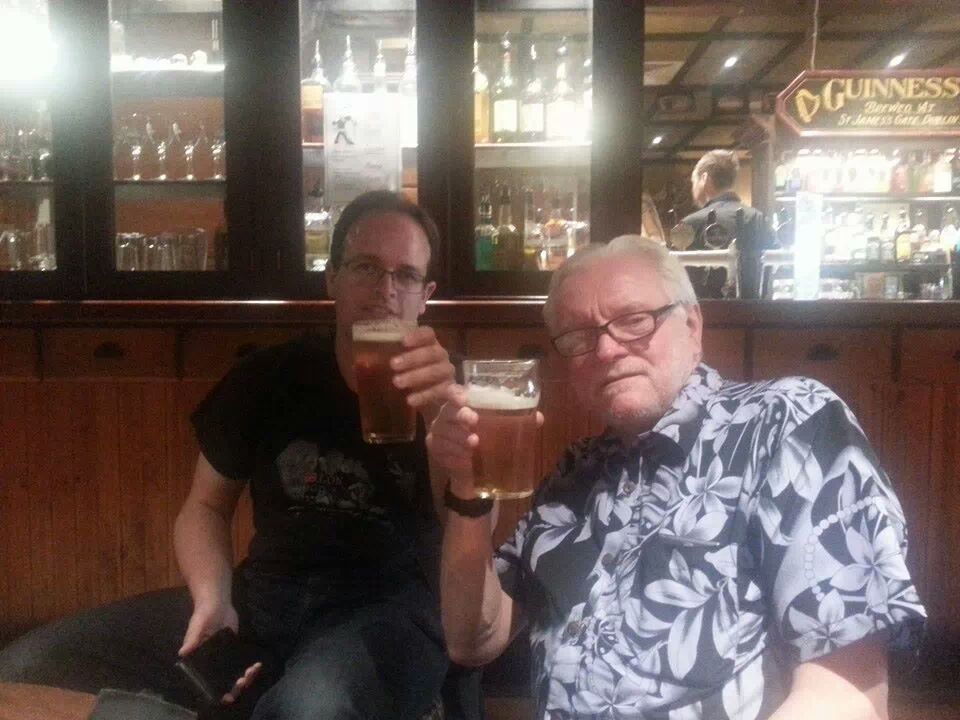 I sent the photo to Meryl as a reminder that we haven’t forgotten her.

Myself and Mr Bowditch are drinking beer in your dishonor.  The funds from your unsuccessful AVO appeal are certainly coming in handy at this time so it seems only fitting that we should send you this photo as proof that your money is well spent.

We then had to wait until Monday for the decision to be handed down, and it was everything we had hoped for.

AVN applied to the Tribunal for a review of that decision. I have decided that the decision to direct AVN to adopt a new name is the correct and preferable decision. But my conclusion is not based on a finding that AVN’s message is exclusively anti-vaccination, that the name suggests a connection with the Commonwealth government or that the name itself is undesirable.

AVN’s main object is the dissemination of information and opinions that highlight the risks of vaccinations. AVN is sceptical about vaccinations. The existing name, Australian Vaccination Network Inc, suggests that the association is pro vaccination or, at least, is committed to providing comprehensive information and opinions about the pros and cons of vaccination. The name should be changed so that it is not likely to mislead the public in relation to its main object. Although I do not have to decide this issue, a name that includes the word “risk” or “sceptic” such as Vaccination Risk Awareness Association Inc or Vaccination Sceptics Network Inc would, in my opinion, be acceptable. The name could also include the word “Australia” or “Australian” without suggesting a link to government.

In my view, to be acceptable, the name should reflect AVN’s scepticism about vaccinations. Although I do not have to decide this issue, and my opinion is not binding, a name that includes the word “risk” or “sceptic” and vaccine or vaccination would be acceptable. Examples include Vaccination Risk Awareness Association Inc or Vaccine Sceptics Network Inc. Other combinations of those words would, in my opinion, be acceptable. The name could also include the word “Australia” or “Australian” without suggesting a link to the Commonwealth government. Of course, these are not the only names that may be acceptable.

Order: The decision of the Director General, Department of Finance and Services to direct Australian Vaccination Network Inc to adopt a new name is affirmed.

THE Australian Vaccination Network has again been ordered to change its misleading name after it yesterday lost an appeal in the Administrative Decisions Tribunal.

The original action was brought against the AVN in January by the Department of Fair Trading, which issued a directive to the AVN to change its name “because it had the potential to mislead the public”. The ADT upheld NSW Fair Trading’s direction.

Magistrate Nancy Hennessy found the name suggested the ”association is pro-vaccination or, at least, is committed to providing comprehensive information and opinions about the pros and cons”.

”The name should be changed so it is not likely to mislead the public in relation to its main object,” Ms Hennessy said. –Daily Telegraph

This has been a bad week for the AVN.