Without a doubt one of the most frustrating pseudo-science movements in modern society is the Environmentalist movement. People who oppose Nuclear Power have no place calling themselves “environmentalists” and groups like Greenpeace who peddle nothing but psedo-science fear mongering are best placed in the same basket as Anti-vaccination, Flatearthers and 9/11 Truthers.

Not only do nuclear reactors produce zero carbon emissions during their operation making them one of the cleanest energy sources we’ve ever had. The nuclear power industry also has an unmatched safety record with fewer deaths per Trillion KilloWatt Hours than all other sources. 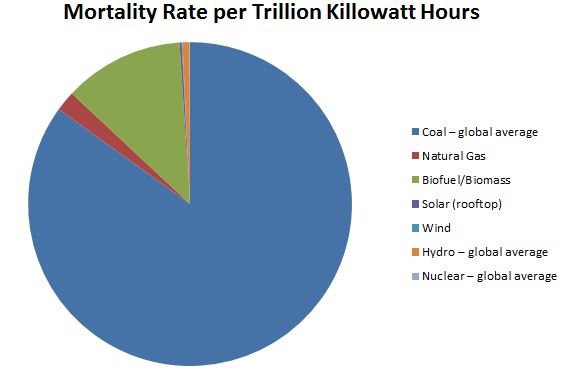 Source: Forbes – How Deadly Is Your Kilowatt? We Rank The Killer Energy Sources

It’s easy to see on the pie chart just how bad coal is, but this numbers this large it’s hard to see Nuclear, Solar and Wind. So here it is again without coal. 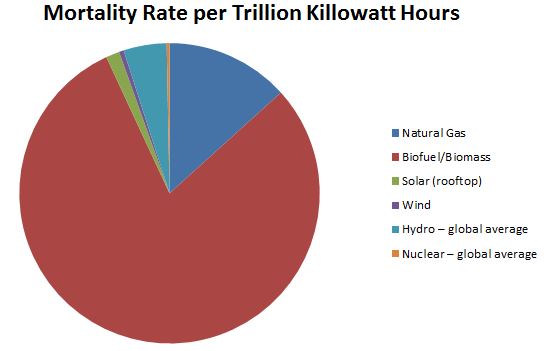 However this has already been argued to death by the scientific community it is a scientific fact that Nuclear Energy is both clean and extremely safe. Arguing against the use of nuclear power is akin to arguing against vaccination because you believe they contain government microchips.

Now in Paris the worlds leading scientists have come out in overwhelming favor of nuclear power.

The world has no little or no chance of escaping dangerous climate change if political leaders and environmental groups fail to embrace nuclear power as a source of low-carbon energy, leading scientists have told the climate conference in Paris.

Renewable energy sources such as wind and solar power offer too little, too late, and the anti-nuclear stance of some countries and almost all environmentalists will only drive many nations towards burning more coal, oil and gas, they warned. –The Independent

The Battle to Save the Planet May Come Down to Nuclear Advocates vs. Environmentalists

PARIS—How frustrated would you be if you had a practical solution for a climate crisis that threatens to ravage the planet and unleash social conflict that will make World War II look like child’s play, but nobody would listen?
Meet the lonely advocates for nuclear power. Here at the Paris climate summit, where the 50,000 attendees, split roughly into half official representatives and half activists, the politics have split pretty much down the middle, too. You have the government folks who are dragging their heels, and you’ve got the climate activists who are focused on using the crisis, Shock Doctrine style, to make the world a better place. The holy word of the activists has become “renewables”—never mind that renewables are still only two percent of the international energy needs and can’t possibly scale up fast enough to solve the problem. –Esquire.com

Nuclear Power Must Make a Comeback for Climate’s Sake

“Nuclear, especially next-generation nuclear, has tremendous potential to be part of the solution to climate change,” Hansen said during a panel discussion yesterday. “The dangers of fossil fuels are staring us in the face. So for us to say we won’t use all the tools [such as nuclear energy] to solve the problem is crazy.” –Scientific American

The science is in and has been for decades. Will the environmentalists finally allow us to address this issue, or will they continue to hold us back with their brainless fear mongering? I think it’ll be the latter, but if enough rational people can be convinced not to listen to green fear mongering we could still win this and potentially save the planet.