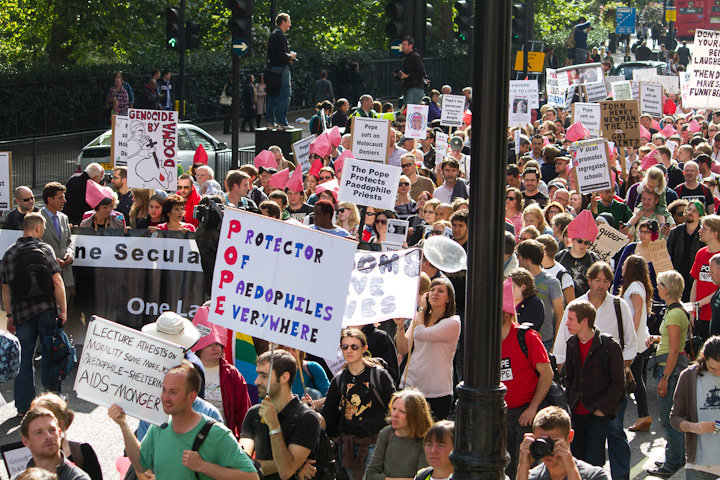 On Saturday thousands of people marched in London to protested the visit of Pope Benedict XVI. The visit is being paid for by UK tax payers some of whom joined the 20,000 strong protest. The march whent from Hyde Park to Whitehall where the rally was held.

Andrew Copson from the British Humanist Association opened up the speeches.

It’s true that as a matter of national policy we don’t use our status as a nation to lobby at the UN against the human rights of women or the human rights of lesbian and gay people. It’s true that our state doesn’t use its recognition as a state to lobby against the use of condoms, even in places suffering epidemics of AIDS. It’s true that our country has never, as a matter of national policy, concealed the sexual abuse of children and frustrated justice for survivors of sexual abuse. But I don’t think this makes us a moral wasteland! And I’d rather be a citizen of Britain than of the Holy See. -Andrew Copson

The tide is turning against the Pope. When he isn’t protecting paedophile priests from the law he is fueling a third world AIDS epidemic. Or using the status of the Holy See to lobby against human rights. The public backlash against the pope should serve as a warning that people want justice to be done. This protest sends a clear message that allot of people do not approve of the Pope; and for good reason. So far the pope and his freakshow have gotten away with covering up paedophile activity but with the world increasingly becoming more secular these human rights abuses can’t continue forever.