Pope Benedict XVI formerly known as Joseph Ratzinger has been implemented in the rape of children by the Catholic Church. Noted atheists Richard Dawkins and Christopher Hitchens have asked human rights lawyers to produce a case for charging the Pope for for his involvement in covering up numerous cases of children being raped by Church officials. 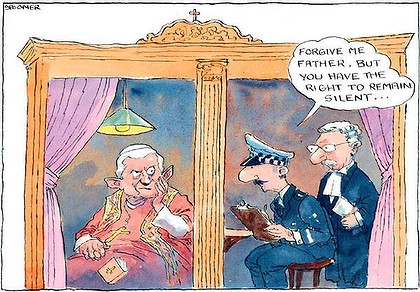 Should the pope be arrested for playing his part in child rape by the Catholic Church?

The lawyers believe they can ask the Crown Prosecution Service to initiate criminal proceedings against the Pope, launch their own civil action against him or refer his case to the International Criminal Court. –Times Online

Nobody would get away with rape in any other organisation and the Catholic Church should be no exception. Most decent people to have the moral standing to report such matters to the authorities.; unfortunately the Pope is not one of them.

Dawkins and Hitchens believe the Pope would be unable to claim diplomatic immunity from arrest because, although his tour is categorised as a state visit, he is not the head of a state recognised by the United Nations. –Times Online

I have always strongly opposed diplomatic immunity, since no civilised nation would grant criminals a free pass. But regardless it is good to know that the Pope is not eligible to even claim such special status. To me it would seem that the Pope is stuck in a very tight spot; if he travels to Britain he faces possible prosecution, and if he cancels his trip there will be much speculation as to why. Even attempting diplomatic immunity will raise the question of why he needs it if the charges are untrue.

In the case of a guilty verdict I would expect the usual barrage of bullshit excuses from true believers in particular “God forgives those who repent”. How I would love to see that excuse tried out in a court of law.

2 thoughts on “Should the pope be arrested?”