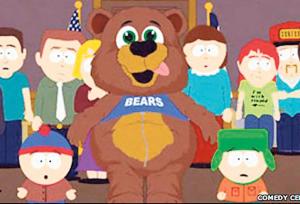 Comedy Central has censored the latest episode of South Park amid fears of reprisal from Islamic terror groups. The shows 200th episode depicts the Muslim prophet Muhammad wearing a bear costume the result of which is a death threat from Islamic Extremists warning that South Park creators Trey Parker and Matt Stone will be murdered.

So much for the “Religion of Peace”

In the 200th episode of South Park, which was broadcast last week, a proposal to bring the Prophet Mohamed to town is met with short shrift at a community meeting. “Are you nuts?” one character says. “If Mohamed appears in South Park we get bombed!” “We don’t know that,” another replies. “Maybe enough time has passed that now it’s OK to show Mohamed.”

As it turned out, that hope was a forlorn one. The American broadcaster Comedy Central this week censored the programme after the episode’s depiction of the Prophet Mohamed dressed as a giant teddy bear drew a warning on an Islamist website that the show’s creators, Matt Stone and Trey Parker, would be murdered. –The Independant

There seems to be a new trend of terrorism popping up in the western world where anything that might offend Muslims needs to be censored for fear of reprisal. This is by it’s very definition an act of terrorism.

1.
the use of violence and threats to intimidate or coerce, esp. for political purposes.