A recurring theme amongst people who sprout bullshit for a living is their utter hatered of anyone who calls them out on it. The Burzynski Clinic in Texas is no exception.
Here’s Eric Merola producer of Burzynski’s infomercial telling people to report Burzynski’s critics to Facebook as a means of surpressing their opinions. 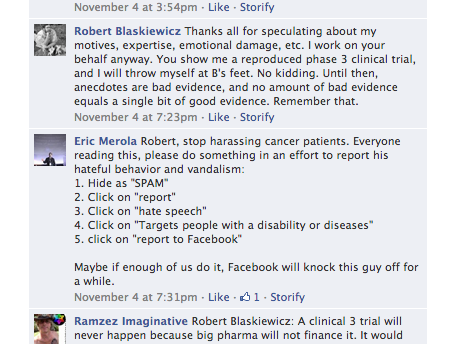 Not only is Merola advocating abuse of Facebooks automated banning system but his company even sent a fradulent DMCA notice to YouTube in order to censor a short video criticising the clinic.

Apparently, someone thinks that they are the only person allowed to have a public opinion about Burzynski in a moving picture, as false takedown order attributed by Google to Burzynski movie director Eric Merola’s production company has been issued against c0nc0rdance, who posted a very good video about the Clinic in February. Whoever did this, well, they done somethin’ ornery. –Skeptical Humanities

As I normally do when I find content being censored by people like Eric Merola I have created a mirror of the video on my own site away from the automated takedown systems of YouTube. Nice try Eric but your censorship tricks won’t work here.
Also Download in mp4