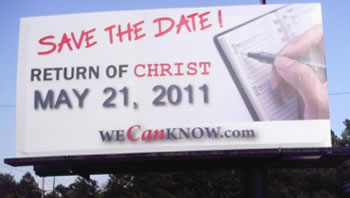 According to some nut jobs out there Jesus is returning to Earth this Saturday. The 21st of May 2011 is the beginning of the apocalypse.

A loosely organized Christian movement has spread the word around the globe that Jesus Christ will return to earth on Saturday to gather the faithful into heaven. While the Christian mainstream isn’t buying it, many other skeptics are milking it. –FOX News

Unfortunately for those of us with more than two brain cells the idea that all the faithful could be raptured away is just wishful thinking. Imagine what we could achieve if we didn’t have stoneage religions trying to hold back scientific progress.

When Saturday passes by without the return of Christ we will be able to chalk this one up as yet another failure by Organised Ignorance. Unfortunately it wont stop them dreaming up more half baked ideas. They are so used to failure by now that it is no longer a deterrent.