Of all the events that took place in the 20th century perhaps none is greater than setting foot on the moon however like many great achievements the moon landings are haunted by conspiracy nut jobs who insist that the landings cannot have taken place despite indisputable scientific evidence to the contrary. The lunar hoaxers like to use poor and even ludicrous arguments to refute history.

One of the most commonly used photographs is the one displaying the American flag and one of the two astronauts, either Neil Armstrong or Buzz Aldrin it’s hard to tell in this photo. 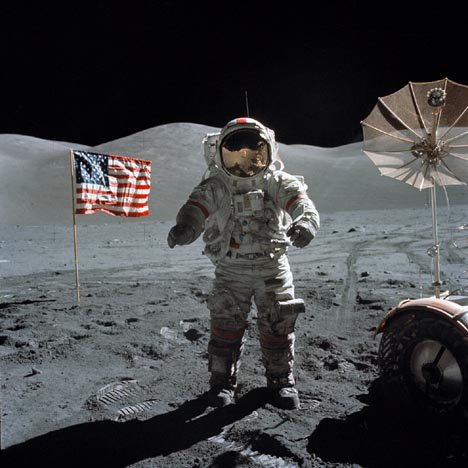 When the astronauts are putting up the American flag it waves. There is no wind on the Moon.

The movement of the flag is caused by vibrations during it’s planting. This movement of the flag does not indicate the presence of wind but instead proves that the flag is in a vacuum. Here on Earth the flag would cease movement considerably faster due to resistance from the atmosphere the lack of air resistance in the vacuum of space allows this vibration movement to continue considerably longer than if the flag was surrounded by an atmosphere. You should also note the flag in this photograph is supported by a horizontal bar across the top which allows the flag to remain upright instead of falling flat against the pole, surprisingly many people fail to notice this in the photo.

No stars are visible in the pictures taken by the Apollo astronauts from the surface of the Moon.

Stars are not visible on the moon during daylight hours for the same reason that they are not visible on Earth during daylight hours. It is not the Earth’s atmosphere that prevents stars from being visible during the day and this is evident by the fact that we can see them at night. The reason we don’t see stars during the day on Earth is because the light from the Sun is simply too bright, this is called Light Pollution and it is the same reason we can see the night sky much more clearly in rural locations than we can around big cities. The daytime sky on the Moon is no different from Earth in this respect.

The footprints in the fine lunar dust, with no moisture or atmosphere or strong gravity, are unexpectedly well preserved, as if made in wet sand.

This one is a no brainer. Without wind or rain the footprints may last for centuries without erosion. This argument is often used by the same crackpots who claim that the flag shouldn’t be moving because there’s no wind on the Moon. So first they argue that there is no wind and then try to argue that the footprints could not possible remain preserved as if they suddenly changed their mind about not having wind on the moon.

The rocks brought back from the Moon are identical to rocks collected by scientific expeditions to Antarctica.

Some Moon rocks have been found on Earth, but they are rare and are often scorched from their entry into Earths atmosphere. The rocks brought back from the Apollo missions do not contain this scorching. Given that the Earth, Moon and many other planets formed from the same mass of particles many billions of years ago it should not be any surprise to find substances on Earth that are also found elsewhere in our galaxy.

No blast crater is visible in the pictures taken of the lunar landing module.

The landing module touches down on a surface of solid rock that is covered by a thin layer of dust, when the Lander takes off it’s thrust is much smaller than would be needed on Earth due to the Moons lower gravitational pull. This results in a significantly smaller blast radius. Which is why you don’t see any blast crater. Although the thin layer of dust is blasted away the solid rock beneath it remains.

Shadows in the photographs indicate that there are multiple light sources similar to studio lighting. 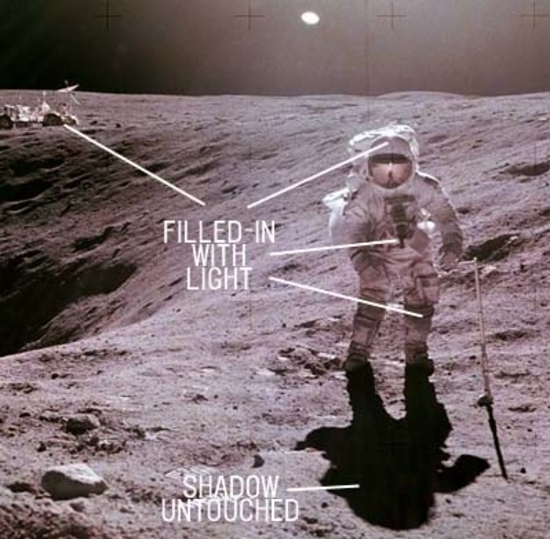 If you have ever looked at a Full Moon you will know that the lunar surface is highly reflective. So there is certainly more than one light source to cast shadows, both the Sun and the Moon that reflects it. This also happens on Earth, you can cast a shadow on the ground without being in darkness yourself.

Apollo astronauts could not have travelled to the moon as a giant belt of lethal space radiation would have frazzled them. 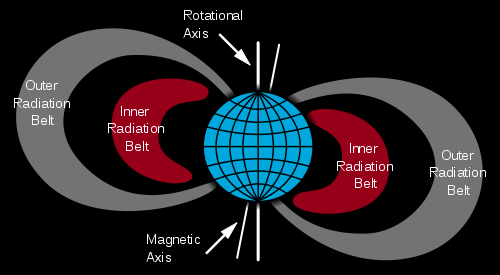 The Van Allen Radiation Belt is a favorite for the conspiracy nuts. The radiation is lethal to Humans but so are X-Rays and yet people have X-Rays all the time. The solution is to not hang-out in the radiation field. The astronauts passed through the belt in just a few hours and were exposed to the same radiation as a normal X-Ray patient.

On one hand we have mountains of evidence from reputable Scientific organisations and on the other we have a bunch of conspiracy nuts presenting absurd unscientific evidence despite the Scientific Consensus that man has landed on the Moon. I know who I’d rather place money on.

23 thoughts on “Why the Moon Landing is NOT fake.”