The anti-vaccination movement is full of nasty individuals, but it’s not often that I find one quite so repugnant as Mark Sircus who actually advocates the lynching of Centers for Disease Control personnel. Mark Sircus writes a blog post titled “String the Bastards Up” where he openly states the following:

Before I go into detail about what has been clear to many of us for years I want to bring the image of the case of a monster who commits mass murder and torments children and their parents. In this case we have a group of them who deserve to be lynched and they work for the federal government at the Centers of Disease Control (CDC). –Mark Sircus

Of course Meryl “I have a brain” Dorey of the Australian Vaccination Network is onboard with this one. Evidently these people are so opposed to life saving medicine that they would advocate murder, both Mark and Meryl are long past the point of reason and are now well and truly into the ideological fanatic stages of insanity.

The anti-vaccination movement is really a cult against health and medicine. It is based solely on an ideology instead of science. Allot of people have legitimate concerns about vaccination and there’s nothing wrong with them seeking more information. But the danger comes from people like Meryl Dorey and Mark Sircus who not only spread lies and misinformation based on an ideology but may also be capable of so much worse; fanatical ideology is dangerous.

However some people who follow the anti-vaxxers are simply misguided by the lies a deceit they are fed by the fanatics and really believe they are being fed good information. However this time some of Doreys followers may have seen the anti-vax cult for what it is. 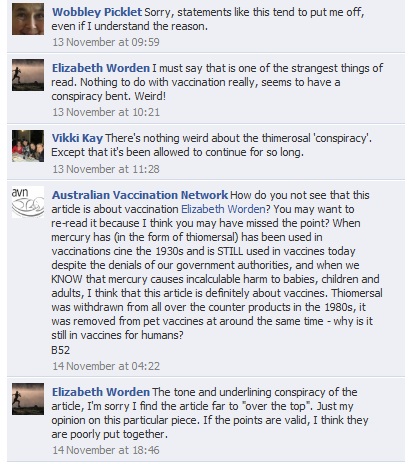 Loyal subjects sense a disturbance in the force.