It looks like that public health menace Meryl Dorey of the Australia Vaccination Network has found a new loon to worship on twitter. His name is Dr. Leo Rebello (@DrLeoRebello) and he’s quite the kook. He bills himself as a “Holistic Health Guru. [sic]” which lends severe doubts about his credentials. Meryl has been retweeting some of his nutty twitter comments. 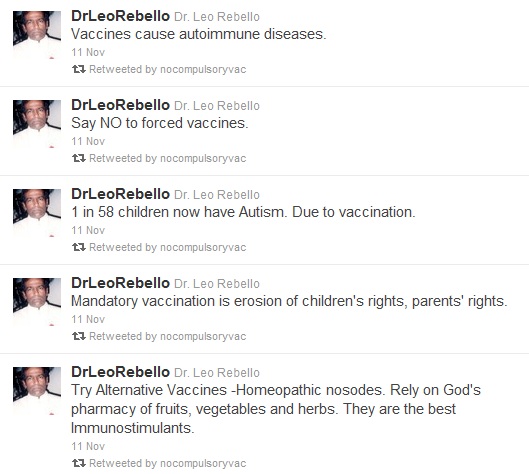 Of course he doesn’t supply any reference for his claims; so Meryl and Leo have something in common there. I have long learned that kooks don’t like evidence because it all too often conflicts with their ideologies. However Dr Rebello is even more loopy than Meryl and makes her look like Einstein by comparison. Here’s some more of his wisdom.

Comments too nutty even for Meryl.

I especially like the “VacciNAZIS” but of course no anti-vaxxer is complete without some child rape. Well a comparison between child rape and vaccination that is. They can leave the actual rape for the Catholic Church.

At the start of the year Meryl Dorey claimed that an Australian court had ordered the rape of a child. “Court orders rape of a child. Think this is an exaggeration? Think again. This is assault without consent and with full penetration too. [sic]” In the minds of both Dr Leo Rebello and Meryl Dorey giving a child life saving medicine the the equivalent of rape. I honestly believe that some people; especially those who oppose life saving vaccination are simply beyond reason.

4 thoughts on “Meryl Dorey has a new kook!”