Normally I wouldn’t give a creature like Tim Bolen any recognition, a paranoid crank with little audience. However it would be socially irresponsible for me to ignore this.

Yesterday I was alerted to one of Tim Bolen’s articles that were posted to a mailing list of the Australian Vaccination Network by none other than the president of the AVN, Meryl Dorey. While she didn’t write the article herself the fact that she chose to share it by distributing it to the mailing list suggests that she has no problem with its content. We also know that Tim Bolen enjoys privileges through his association with Ms Dorey, demonstrated by the fact that he was provided with full copies of her court submissions before even the courts were able to view them. 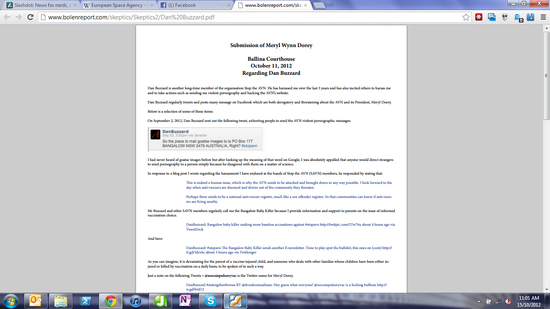 Despite the date Ms Dorey didn’t file her submission until the 15th, and I didn’t receive it until the 19th. Yet, this copy was available on Tim Bolen’s website.

In his latest article Bolen talks about Daniel Rafaelle and repeats the allegation that several threatening phone-calls were made to Ms Dorey by Mr Rafaelle. However there is little reason to believe this allegation to be true. It’s my understanding that the police investigated and found insufficient evidence to support any accusation against Mr Rafaelle.

But that doesn’t stop Tim Bolen from repeating the accusation. I’ve learnt that people like Tim Bolen care little for things like truth and evidence and many even use lies as a means to justify the use of violence against critics, Tim Bolen is one of these people.

For clarity Tim Bolen is accusing skeptics of being ‘Stalkers’ and painting anti-vaxxers as ‘victims’. A common tactic of habitual bull-shitters is to try and demonise anyone who calls them out on their mistruths.

Does that mean that nothing can be done?  Nope.  That means that Dorey, and her associates, now have the advantage, and if played correctly, can pick up all of the marbles in this game.

How?  Easily.  For the laws in every jurisdiction basing its system on English Common Law (England, Australia, Canada, and the US, etc.), are pretty much the same.  They favor the stalking victim – BIG TIME.  More, they allow a response that would, in normal circumstances, be frowned upon.

In short, if played right, the stalking “victim” can lure the predator into a dark place, so to speak, where angry friends are waiting (quietly) to make the equivalent of a “citizen’s arrest.”  And, they are allowed to wait there quietly, armed with the equivalent of a baseball bat, or two, or three, to be used to “subdue, with reasonable force” the stalker, holding them for the local law enforcement. Now ask yourself “What exactly would YOU, as a reasonable person, define “subdue, with reasonable force?” considering, first, that this “stalker” has, already threatened “rape, mutilation, and death by fire?”

Of course, with the threat level what it is, in Australia (rape, mutilation, and death by fire), a prudent person would have one, or more, friends with Vietnam, Iraq, Afghanistan, experience along so that if a weapon appeared in the hands of the stalker…  Use your imagination. –Tim Bolen, Lunatic

You read that right? Tim Bolen is suggesting that it’s appropriate to lure skeptics into a “dark place” and then deal with them as you see fit. The so called ‘Citizens Arrest’ suggested by Bolen would constitute a criminal offense no matter what the target were accused of, not even the police are entitled to use what Bolen considers “Reasonable Force” that would be called either Murder or Grievous Bodily Harm.

So far the following Anti-vaxxer tactics have failed:

Perhaps frustration caused by their continual failure to stand up to scientific scrutiny is forcing them to turn to alternate means of silencing their critics. We know they can be quite creative for example reporting skeptic blogs as malware was certainly original.

Violence may very well be the next step. Anyone attending an anti-vaccination seminar should be aware of psychopaths like Tim Bolen who may be about. While the majority of anti-vaxxers are simply parents who’ve been lied to, some of them can be quite fanatical and there’s no knowing who might turn up. As bad as Tim Bolen’s suggestion is we should remember that it was distributed by the head of an Australian “Charity”.

Note: I refuse to provide any direct links to Mr Bolen’s website; using screenshots instead. Because he has previously posted a picture described as “a black man raping a dead white woman whose body has already been torn in half.” on his website.

One thought on “Anti-vaxxer suggests violence as a means of dealing with critics.”