Last week I was in Sydney to attend The Australian Skeptics National Convention. A yearly conference held on the east coast (I have not yet convinced them to come to Perth) to promote science and skeptical inquiry. One of the annual highlights of the conference along with the high quality talks and presentations, is the annual awards such as:

The Bent Spoon Award is presented annually to the perpetrator of the most preposterous piece of paranormal or pseudo-scientific piffle. Read Barry Williams’ overview of the history of the Bent Spoon Award. What is it? How was it constructed? How are nominations selected? Who are the previous winners? Barry explains it all. –Australian Skeptics

This years Bent Spoon Award went to Dr Larry Marshal the new head of Commonwealth Scientific and Industrial Research Organisation (CSIRO) for his belief in water divining. Yes, it is awarded as an insult.

The Thornett Award for the Promotion of Reason:

The Thornett Award for the Promotion of Reason commemorates Fred Thornett, a Tasmanian Skeptic who died in 2009. In true awards fashion, we call it “The Fred”. The Fred acknowledges a member of the public or a public figure who has made a significant contribution to educating or informing the public regarding issues of science and reason. In addition to a commemorative certificate, $1000 is awarded to the recipient or to a charity or cause of their choice. –Australian Skeptics

This years Thornett Award has been issued to the Northern Rivers Vaccination Supporters for their work promoting vaccination in communities across northern New South Wales. 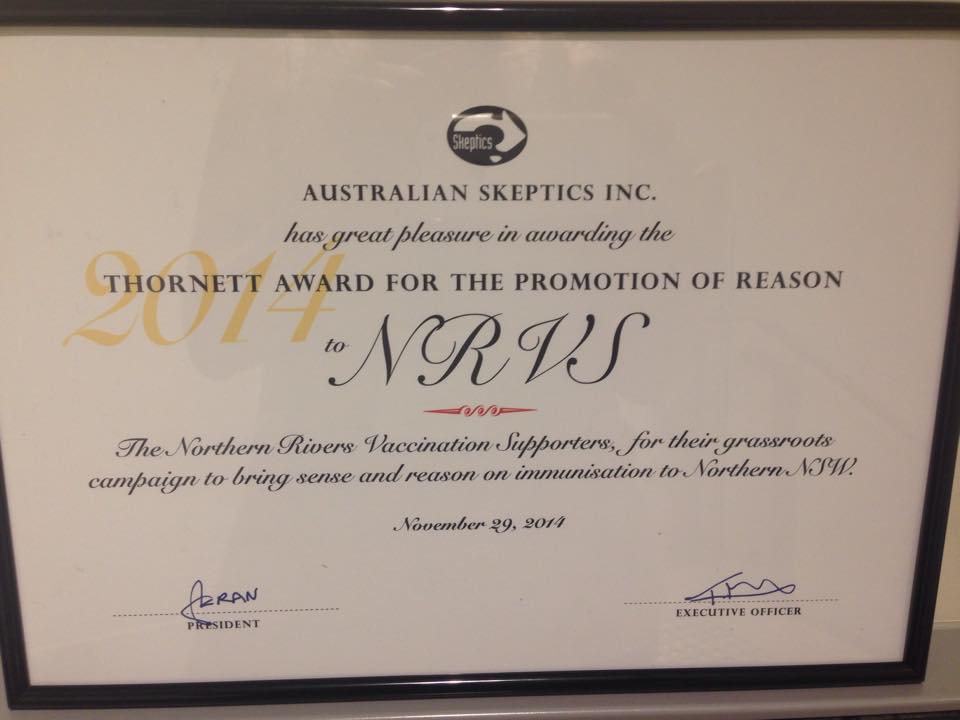 We are very excited to announce that our group has won the Thornett Award for the Promotion of Reason, presented to us at the 2014 Australian Skeptics National Convention!

This prestigious award also comes with $1000 in award money.
We are so proud of this and proud of our wonderful members. We are excited that we will be able to use this money to help get our message out there to the residents of the Northern Rivers.
Vaccine Preventable Diseases continue to be a real threat in our region and we will continue to battle the misinformation out there, give support to those seeking it, and provide a voice for the vulnerable in our communities. –Northen Rivers Vaccination Supporters

Skeptic of the Year:

This years Skeptic of the Year has gone to Peter Tierney also known as Reasonable Hank on Twitter and his blog ReasonableHank.com

It was with quite some delight and surprise that I found out I was the winner of the Australian Skeptic of the Year gong, awarded by the Australian Skeptics, today. It was, indeed, a pleasant interruption to my usual program of furrowed-brow-fueled curmudgeonality.
I share this award with all of you who have contributed in any way to the blog, wherever in the world you reside. Thank you for all of your help.
As I was unable to attend the Convention my very good friend, Ken McLeod, accepted the award on my behalf: 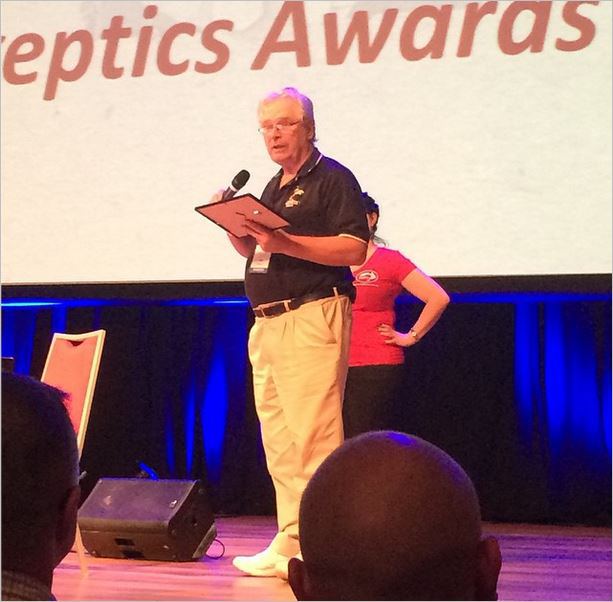 Unfortunately Peter was not in attendance at the conference so Ken McLeoad accepted the award on his behalf. I have yet to meet Peter Tierney in person. Hopefully we will remedy that at some point.