Anti-vaccination group the Australian Vaccination Network has failed to adopt a new name.

On the 24th of December 2013 sources monitoring the registries at Australian Securities & Investments Commission learnt of an attempt to register the name “Australian Vaccination Sceptics Network” however the registration never left “pending” status before vanishing from the record.

As a precaution I submitted an application for the same name on the off chance that the attempt may have been the AVN trying to hijack the term Skeptic. 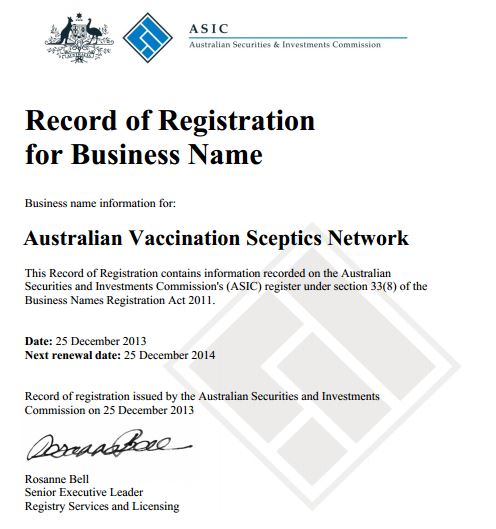 We now know that the registration attempt was indeed made by the AVN.

THE Australian Vaccination Network, which promotes the “benefits” of measles and believes vaccines cause autism, has lost its first battle to find a new name.

The Australian has identified a failed attempt by the organisation to “reserve” the name Australian Vaccination – Sceptics Network with the Australian Securities & Investments Commission.

In the wake of the failed attempt, other members of the public rushed to register the name as well as Australian Vaccination Skeptics.

Network president Greg Beattie said he “did not care” whether the attempt at a new name provoked more attempts to expose the group as unscientific. “We have reserved the name but we haven’t registered it,” he said. –The Australian

How can the AVN have “reserved” a name which I now own? Another lie.

Efforts to force the AVN to adopt a non-deceptive name are ongoing.