As expected Meryl Dorey of the Australian Vaccination Network has come out accusing the courts of corruption because they refused to issue orders that myself, Peter Bowditch and Daniel Raffaele be restrained from talking about her on the internet.

Last year, at the suggestion of police in two NSW jurisdictions, I filed three separate APVOs: against Daniel Raffaele, founder of Stop the AVN (SAVN), Peter Bowditch, committee member of the Australian Skeptics and Dan Buzzard, WA member of SAVN.

I could have filed APVOs against many more SAVN members. So many have threatened and harassed me, as well as inciting others to do me harm, but these were the three whom I considered to be the ‘ringleaders’ – whose abuse and harassment were unremitting. My reasons for taking this action were two-fold

1-    To stop them from continuing their criminal campaign of abuse, harassment and threats against me; and

2-    To send a warning to others that the justice system would protect someone who was being openly abused, harassed and threatened.

1. To date Ms Dorey claims about being harassed and threatened are dubious at best. I still await credible evidence of these claims.

2. I am well aware of Ms Dorey intention to intimidate her critics with these lawsuits. In court I clearly stated that I agree with Ms Dorey taking out AVOs against people who abuse, harass or threaten her. But as I am not one of those people I have to question her motive for naming me in the lawsuit.

I wonder if it had anything to do with the Australian Vaccination Network trying to keep their committee members hidden from the Department of Fair Trading? 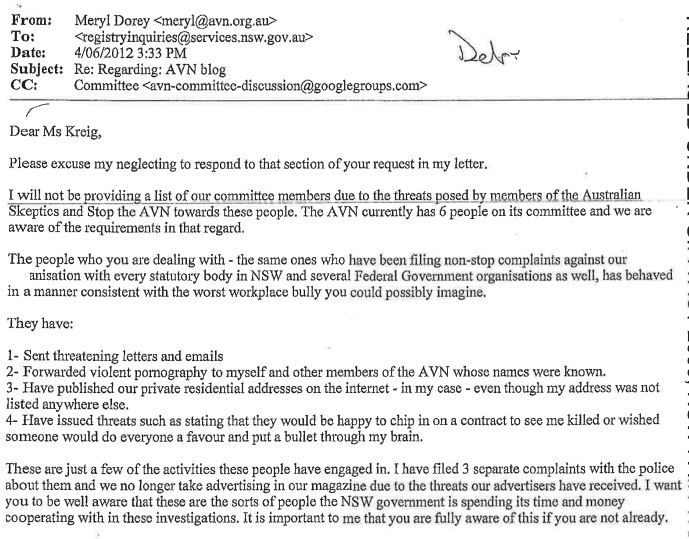 Freedom of Information is a wonderful thing.

It is my firmly held belief, based on the evidence from both cases that actually went to trial, that my losses had nothing to do with the evidence presented to the courts. Based on that evidence alone – APVOs should have been granted without question. But both magistrates showed a strong disapproval for the work that I have done for the last 20 years with the AVN and I feel that they were unable to separate Meryl Dorey the mother, woman and victim of institutionalised and long-running abuse, from Meryl Dorey, ex-President of the AVN and vaccine rights advocate.

More lies, the magistrate made it clear that the case had nothing to do with vaccination and was about whether or not Ms Dorey had cause to fear the defendant. In my case despite having an almost 4 year long opposition Ms Dorey simply could not produce any evidence or justification for seeking an AVO against me.

Ms Dorey did present evidence of a death threat sent to her by a user called fantasticfox5@tormail.org but this person has no connection to me other than having emailed me on a single occasion, which can be seen here. I told the court that I think Ms Dorey would be perfectly justified in seeking an order against that individual, but I don’t see how the actions of an unknown third party have anything to do with me.

Just a clarifying note at this point for those who are unaware of my case against Daniel Raffaele: the APVO against him was granted without his making any admissions of wrongdoing even though threatening calls to my home were made from his house in the middle of the night. I was advised to accept these terms rather than going to trial. In retrospect, I think I made the right choice since even with the damning evidence against him, I am unsure that the courts would have granted my application had Raffaele opposed it.

The key phrase here is “Consent without admission” Mr Rafaele consented to the AVO in order to avoid the costly and time consuming proceedure of defending against a vexatious litigant. While I can certainly understand the desire to get the AVO out of the way fast I believe Mr Rafaele made a mistake in consenting to the AVO. Meryl Dorey and current AVN President Greg Beattie continue to make unfounded allegations against Mr Rafaele despite there being no admission to any wrong doing.

When I went to the courthouse last year to make the initial applications, I selected several of the standard orders from the list available (orders which limited the perpetrator’s ability to come near me or enter my property or threaten me). I also asked that they not be allowed to mention me in any online forum in a derogatory manner. At the initial mention in Ballina Courthouse almost a year ago, the magistrate said that he did not have the power to grant the latter order and I agreed to withdraw it. All I was asking the court to do was to prevent them from coming near me or physically threatening me. None of that would in any way ‘silence’ them.

Not true, the purpose of these AVOs was to bully, defame AND silence her critics. I have the documentation that specifically asks that I be silenced on the internet and numerous examples of her defaming the defendants long before the cases even got to court. Her continued defamation of Daniel Rafaele only shows that these application were not brought in good faith and only intended to harass.

In fact, during the time when these cases were still before the courts, sub judice reports were appearing in the media to the effect that taking away my opposition’s right to free speech was the only reason I made these applications.

Ms Dorey was speaking on public radio and sending out media releases about the AVOs within days of filing them. Long before this article was published: Founder of anti-immunisation group Australian Vaccination Network, Meryl Dorey, uses AVOs to gag critics

It is my belief that the magistrate in my case against Dan Buzzard may have used this misinformation in his decision since he did refer to media reports when making his summation. In fact, he criticised me openly many times during the hearing to the point where I was relieved to only have to pay $11,000 in court costs – at one point, I had the distinct impression that I was going to be sent to gaol. I do not remember him sanctioning Dan Buzzard even once despite his admissions to having asked people to send me violent pornography.

I believe that Ms Dorey will be serving time behind bars in the future. Obviously not over an AVO hearing, but over the many unlawful and fraudulent activities engaged in by her organisation. A few of which I have written about. Also I didn’t tell people to send Dorey “violent pornography”, the court obviously realised this.

These people are truly guilty of using bureaucracy and the media to silence their opposition.

All I asked was that the courts protect me from these abusers who had openly threatened and harassed me. This is a protection that should be available to all Australian citizens and residents – indeed – to everyone in every country around the world. It is a basic human right which, thanks to what I consider to be the bias of the courts, was denied me in these cases.

I continue to wait for evidence that Ms Doreys critics have ever engaged in unlawful activity against her. So far as the evidence suggest all SAVN members are operating entirely within the law.

Ms Dorey clearly thinks that the act of simply initiating a lawsuit implies guilt on behalf of the defendant. It does not you still have to prove the allegation in court, she found out the expensive way.

Read about my case here.

One thought on “AVN Founder accuses the courts of corruption.”