I have just learnt that a board member of the Australian Vaccination Network wishes to run for office in Clarence Valley, New South Wales.

People who oppose vaccination do not belong in civilised society, the information spread by the Australian Vaccination Network is both dangerous and misleading. Not only is Jane Beeby playing a role in the spread of this anti-vaccination fear mongering but she also wishes death upon people who challenge her seriously delusional anti-vaccination ideology. 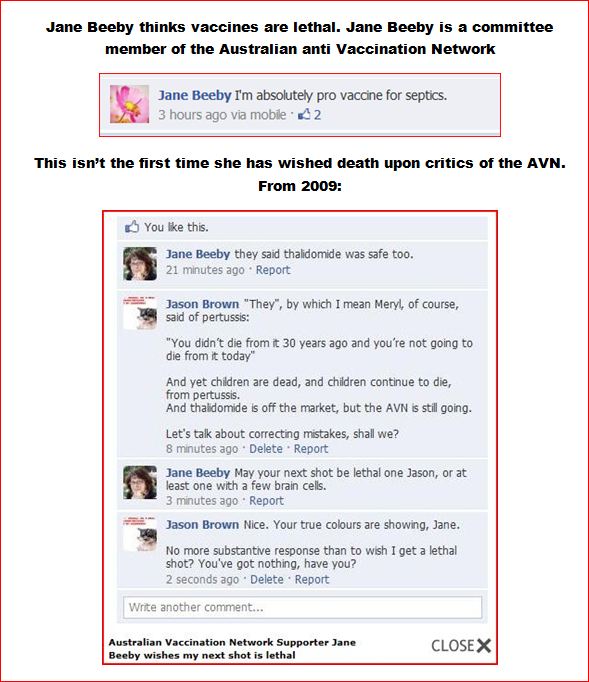 Jane Beeby writes “May your next shot be lethal one Jason, or at least one with a few brain cells.”

Jane Beeby did have a Facebook page for her political campaign, but she has since deleted it thanks to Reasonable Hank who went there to ask questions. Apparently she doesn’t like answering questions about her wishing death upon those whom she disagrees with.

Here is Jane Beeby telling another critic to drink bleach. 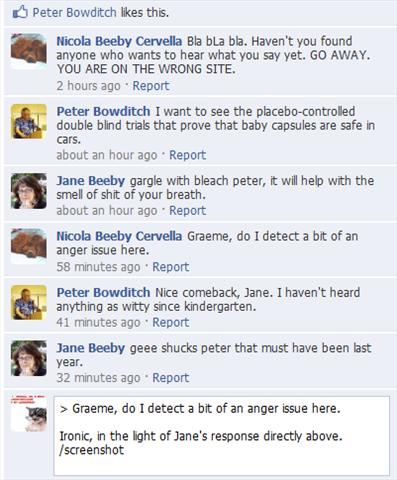 Jane Beeby writes “gargle with bleach peter, it will help with the smell of shit of your breath.”

Did I mention this woman also thinks children should be denied life saving vaccinations leaving them vulnerable to horrific disease. Yes, I did mention she was anti-vaccination earlier but it’s worth mentioning twice. Jane Beeby is absolutely unfit for anything except a straight jacket. Do NOT vote for Beeby; your children will suffer for it.

One thought on “Jane Beeby is unfit for public office.”