This is my account of the Australian Vaccination Networks seminar that was held at the State Library of Western Australia on the 1st of June 2010. Both myself and Kylie Sturgess who is more commonly known online as Podblack attended the lecture. We also had @LuminousMonkey and 3 others to help out with flyers, I apologise for my failure recall their names hopefully I can rectify that to give them acnowledgement.

I arrived at the Aroma Cafe situated in the foyer of the library a little later than intended but we still had plenty of time before the Seminar started, so it worked out ok. Before going in @Podblack checked the Names list outside the auditorium, my name was on the list as both our Tickets had been booked under my name. She didn’t notice any asterisk or marks near my name that might suggest the AVN could be onto us. In either case I would not expect much of a response if they did realise who we where except perhaps some closer monitoring. The truth has a tenancy to hurt the AVN so the last thing they really need are some Skeptics reporting back to other Skeptics. This is of course exactly what we were intending to do. I even publicly announced this intention a week before the seminar so it would not be at all surprising if the AVN were alert to our presence.

Going into the Auditorium was interesting as there were two security guards by the door in all black suits and wearing communication earpieces on the side of their heads. They resembled the stereo type Mafia/Gangster body guards. I don’t know if they were AVN security or Library security but either way I don’t think they where intended to present the Mafia image; I just watch to many movies.

I had my video camera with me but the AVN explicitly forbid cameras from being used in their seminar. Even channel 7 was denied access to film so I decided that the consequences of filming outweigh the benefit because not only would I be kicked out but it would also provide ammunition for the AVN to cry persecution by “the Skeptics” and could reflect badly on both myself and Podblack.

Dave the Happy Singer @happysinger added some speculation as to why this might be. 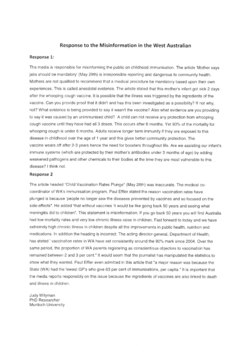 The first thing that happened as we got into the auditorium was the AVN distributing flyers in response to an article in ‘The West Australian’ newspaper. Unfortunatly I have not read that article yet but I will post the flyer that the AVN was handing out (you can click it on the right). If anyone has a copy of the newspaper article that the AVN is trying to refute I would really appreciate it.

During the entire seminar there was a distinct “Clickity, Click Click” sound coming from my left hand side as Podblack was attempting to transcribe and tweet the entire seminar. Using a computer she was able to take notes and tweet much faster than I ever could using a phone for twitter, Pen&Paper for notes. I only got a page of notes, she got at least 8 plus more numerous and detailed tweets.

At last the power began to fail on Podblack’s MacBook. No more “Clickety Click Click”, plus I would now have the monopoly on live tweeting. But alas she found a power outlet and the MacBook was destined to live on.

Throughout the seminar Meryl Dorey kept trying to draw a link between ‘Big Pharma’ and financial profit. The real agenda of this seminar was to propagate conspiracy theories against organisations who are in the progress of saving lives. There is nothing inherently evil about making a profit and if anyone disagrees with me I strongly suggest they move to a communist country. If you can save lives while making that profit then shouldn’t you be regarded as the exact opposite of evil; Not according to Meryl Dorey. Not only did she pick on Big-Pharma but she also tried launching absurd unfounded attacks against the health authorities by trying to tie them up in her wack-job conspiracies. Not a single representative of the WA Department of Health turned up, despite being invited by the AVN. Personally I suspect the reason that the seven empty seats set aside for them remained empty is because our Health Officials do not want to be seen endorsing the anti-vaccination movement, but of course to Meryl Dorey this is just evidence of a conspiracy between the Government and Big-Pharma; and she didn’t hesitate to point this out.

Near the end of the lecture Meryl Dorey announced that there were two people who she would like to acknowledge. Podblack who was busy Twittering stopped immediately, I was writing notes at the time and also stopped at this point. Was she about to out us as Skeptics? No, she wasn’t instead she was acknowledging two of her fellow anti-vaxers. However I have just noticed the following comment on the AVN Blog.

Dan – I really look forward to meeting you and the black cat on Tuesday – you are both such interesting characters.

How can you claim that “Freedom of Speech is the greatest freedom we have and it applies to all of us on equal terms.” as a way of justifying the fact that you and your henchmen consistently try to get our seminars cancelled using the argument that we don’t deserve freedom of speech?

I believe that you skeptics represent the epitome of hypocrisy and truly wonder what your real motivation is. I don’t view any of you are the caring, sharing types because a person who cares about other people would never treat anyone with the disrespect and disdain that I see you treating informed parents with. You should be ashamed of yourselves but I think that none of you has any shame or conscience. –No Compulsory Vaccination

Perhaps we should have made ourselves known after all. Then again she had all her bullshit cannons loaded. Who knows what her response might have been. Because telling the truth is certainly not on Meryl Doreys agenda. Unfortunately the average person is poorly informed about vaccinations and might not see through Meryl Doreys bullshit.