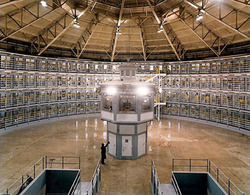 The Panopticon is a concept in prison design where by every cell and inmate can be monitored from a central tower; the all seeing eye. However this concept now extends beyond the design of prisons. In the 21st century the Panopticon is creeping into mainstream society where the everyday lives of ordinary citizen are increasingly under the surveillance of government authorities. While there may be no observation tower planted at the centre, our society is increasingly reliant on technology that improves many aspects of our lives but unfortunately this technology can also be used against us and often without our knowledge or consent.

In our modern technology driven lives we are seeing an increasing intrusion into our private lives, everything from Surveillance Cameras to Biometrics to Phone Tracking is being used to track and identify us as we go about our daily lives.

It is important that we take the time to consider the ramifications of our governments increasing obsession to watch over us. Especially when it comes to our use of technology as a primary form of communication; in particular the Internet. As many of you will be aware the government is currently launching an all out assault on the Freedom of Speech that our society has always valued and taken for granted in the form of Internet Censorship. As if this undemocratic attack on our most basic human rights was not appalling enough the Department of the Attorney General is launching a fresh blow against Australian Citizens by announcing plans to force ISPs to track all internet users by keeping a log of activity for up to 2 years. This gross invasion of privacy comes just days after Attorney General: Robert McClelland demanded that the federal police investigate Google for daring to collect publicly broadcast information from Wireless (WiFi) networks.

It is not yet time for the tin-foil hats however this alarming trend of increased government surveillance and attempted suppression of speech needs to be watched very closely. Because freedom has a price as Thomas Jefferson once said:

The price of freedom is eternal vigilance.