As an online discussion grows longer, the probability of a comparison involving Nazis or Hitler approaches 1.

Clowns like Meryl Dorey who posses an over inflated persecution complex are particularly prone to mentioning Hitler and Nazis when talking about their opponents. This morning Dorey likened the activities of the NSW government to the holocaust.

On first reading of this bill, it is easy to see how little thought has gone into it. Calling it a knee-jerk reaction would be putting it mildly. This is legislation driven by a sector of the media with close ties to vaccine manufacturers and run on the back of a hate-filled vilification campaign which Australia has never seen the likes of before. This campaign has gone beyond all reasonable boundaries expected in a civilised society. Comparisons can be drawn between the current situation in Australia and historical social conflicts such as the McCarthy Era in the US and Hitler’s vilification of the Jews during the 1930s and 1940s. At least with these issues, there was plenty of public debate going on. Today, there is censorship and suppression of any discussion which is not in line with government and medical opinion on the subject. Should this blatant discrimination continue, history and the world will not judge Australia well.

She was quickly taken to task by a commenter on her own blog. But as usual she fails to see just how wrong she is. Much like the time she compared vaccinations to Child Rape. 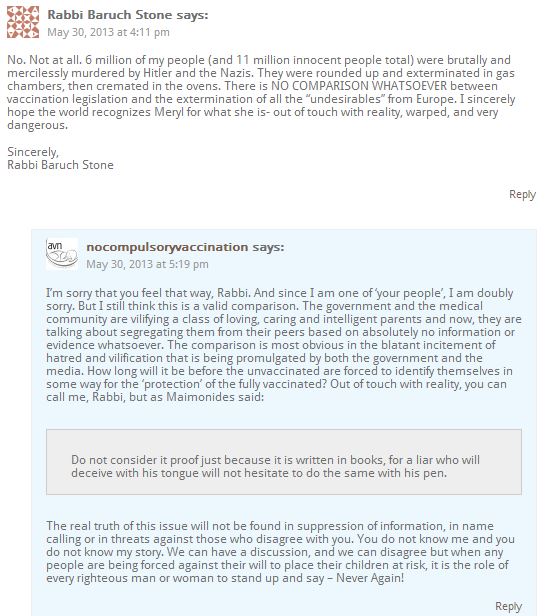 The Rabbi is right! Meryl Dorey is out of touch with reality, warped and dangerous. Her own actions condemn her more than any of her critics can. No reasonable person could possibly compare health care legislation to the genocide of 6 million people.