The announcement came after the Opposition raised concerns that the AVN was using its Facebook page to encourage parents to join up to a religion, in order to avoid new State Government vaccination laws. –ABC News

Yes the Australian Vaccination Network really is trying to promote a new religion in order to flout the law. 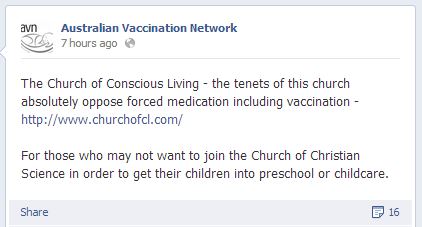 Anti-vaxxers are nothing if not creative when it comes to dodging the law. I’m confident that our lawmakers will soon find a remedy to patch this unscrupulous attempt to circumvent the law. This is not the first time the HCCC has investigated the AVN.