Anti-vaccination campaigner Sherri Tenpenny has just announced that her tour in Australia is cancelled. 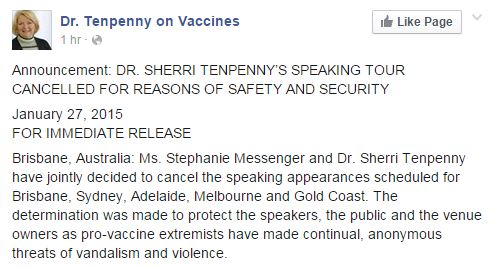 It’s interesting the Tenpenny should cite threats of violence as a reason for the cancellation. Especially as all the death threats and abuse during this campaign have come from her own supporters.

See: Venue cancels after anti-vaxxers threaten to bomb it.

There are other examples of Tenpenny supporters acting in this way which can’t be disclosed for legal reasons. However Tenpenny will conveniently omit the fact that the only known threats have come from her own supporters.

I suspect the real reason for her cancellation is that no venue will have her. The false victim card is a favorite amongst anti-vaxxers, rather than just admitting that no one wants them. So until Tenpenny can provide anything to substantiate her claims to have been threatened it remains just as dubious as anything else she says.

Hopefully this cancellation will put anti-vaxxers on notice that they are not welcome in Australia and we will continue to stop them. Go spread your pseudo-science fear mongering elsewhere. #StopAVN FTW.