For the past several weeks Meryl Dorey of the Australian Vaccination Network has been engaged in a campaign of revenge again me for speaking out against her deceptive, fraudulent and misleading practices. It began in August with a few blog posts on the AVNs website titled “Dossier of Attacks on the AVN” where Meryl attempts to hurt her critics by posting complaints we’ve made against her.

However unlike Meryl Dorey the truth doesn’t hurt us; because we’re right while she is proven repeatedly to be in the wrong. So “exposing” us by posting content we freely make available ourselves doesn’t cause us any damage. It would appear that Meryl Dorey is baffled by this as she is constantly trying to cover-up her own actions, while her critics apparently have no need to cover theirs.

No doubt frustrated that her attacks were having such little effect Meryl Dorey decided to up her campaign against me and go after my Facebook account with the intention of censoring me from the “Stop the AVN” page despite the fact that she is not an admin there. To do this she takes advantage of the fact that Facebook has an automated complaints system that does not ask questions.

That’s right just those two posts got me banned from all of Facebook for 24hours. The posts were on a Skeptics Facebook page not the AVN, but obviously they were seen by either Meryl Dorey or one of her supporters. I should point out that this can be done by anyone without any oversight from Facebook.

Of course she won’t stop there, not while she has crime (Perjury in the United States) and misdeeds to cover up. So when I posted a link to my blog on the Stop the AVN Facebook wall (A page Meryl has no ownership or admin claims to) it didn’t take long for her to pounce and hit the report button.

So once more Meryl Dorey has succeeded in censoring me, this all seems a little desperate. Meryl Dorey likes to bang on about how great freedom of speech is, yet she will do anything she can to prevent it.

Fortunately another Skeptic was on the case. 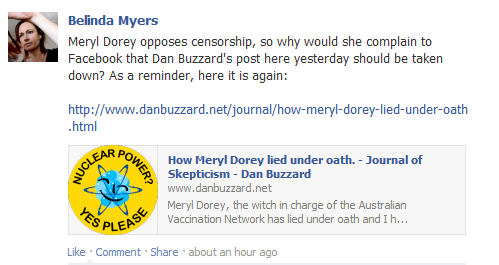 But this reposting was removed twice and I suspect Belinda was likely banned from Facebook after having two complaints filed.

Then another person decided to post my blog directly on the AVN’s Facebook wall. I’m sure the anti-vaxxers would not have been amused by this, but then again the truth always was offensive to them. 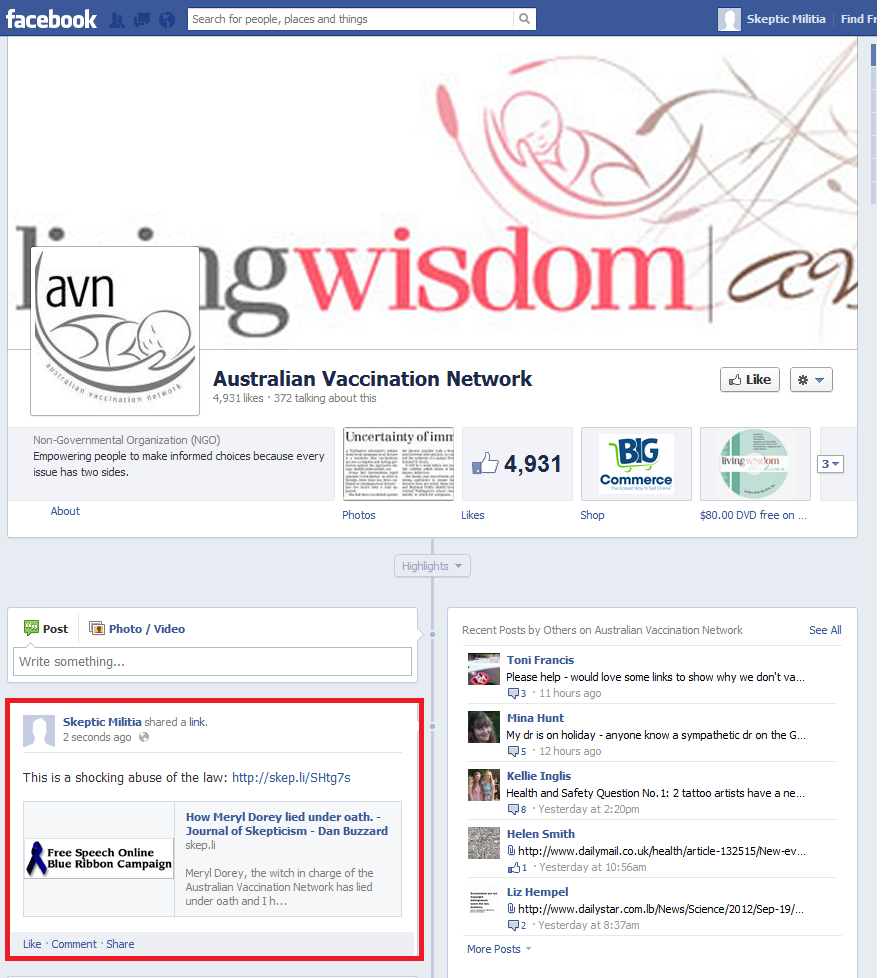 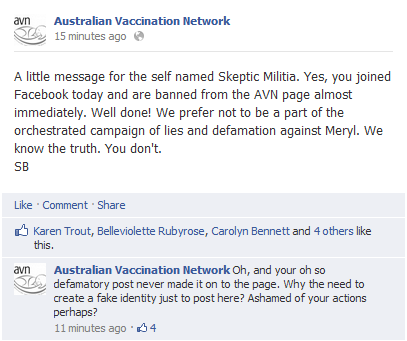 Actually the truth can be found by reading the link that appears on the SAVN wall. You don’t find the truth through censorship and suppression of information. Of course those with everything to hide have to choice but to engage in censorship campaigns because the truth is ultimately their undoing.

The user “Skeptic Militia” was kind enough to email me the Facebook takedown notices they received. Along with the resulting ban.

Gee wouldn’t want someone to make it known that they have evidence now would we?

I’m no psychiatrist but Meryl Dorey seems to be getting quite desperate to censor her critics. Although this type of behaviour isn’t new, the AVN is known to abuse, harass and accuse people of child rape if they don’t fall into line with the anti-vaccination ideology. Just for the record Meryl Dorey has stated that she refuses to stop using the rape accusation.

This woman runs a registered “charity”.

So far at least 5 Facebook posts on the Stop the AVN Facebook page that includes a link to:  https://www.danbuzzard.net/journal/how-meryl-dorey-lied-under-oath.html have been removed due to vexatious automated complains. Her insane determination to see the post censored has motivated me to contact the San Fransisco District Attorney’s office to find out if anything can be done in regards to Meryl Dorey lying under oath. Originally it was just going to be a blog post but after such a hostile responce I think it’s worth at least exploring the options since she’s clearly rattled by it.

I also just got word from Facebook that this image has been reported as abusive.

Meryl is due in court on Thursday. So it probably wouldn’t be good for her if someone were to use the above screenshot as a demonstration of her lack of respect for the judicial system. Suggesting the courts may be Bias if they don’t agree with you is unlikely to win any friends.

If anybody has screen shots of warning messages they’ve receive from Facebook. I request that they forward them to me via email: Dan@danscomp.net It would be much appreciated.

While I have no problem with people simply using words. It seems that the anti-vaxxers are determined to go to any length to silence criticism. That includes getting their critics disconnected from Facebook and as a consequence disconnected from friends and family who have come to rely on Facebook (despite my protest) as their primary form of communication.

I have stated previously that I would never sue anyone for their words, and my preferred “weapon” (For lack of a better word) is my blog loaded with yet more words that can address any misinformation stated about me. However now that my opponents are taking action beyond just words and attempting to influence a negative impact upon myself, my friends and family I feel that litigation may be the justified course of action. So far Meryl Dorey has succeeded in disconnecting me from my contracts twice, an online equivalent of cutting my phone line. She has also succeeded in censoring me from Stop the AVNs Facebook page, which she is not an admin and no body at SAVN has decided they want me gone. It is not Meryls place to decide that I should be censored from another person’s plat form, by abusing Facebook’s automated systems she has done just that.

I am concerned that this type of censorship will only increase if it is not stopped. Of course this is only the latest in a long list of attacks against critics.

So far Meryl Dorey has deployed the following tactics against her critics.

I am becoming increasingly concerned for the safety of people within the Skeptical community because while the anti-vaxxers have historically never posed a direct physical threat. The Australian Vaccination Network in particular it’s president Meryl Dorey appear to be getting more and more desperate to silence critics as time goes on. Perhaps the realisation that the truth hurts only them and not us is prompting them to look for methods beyond just words for silencing their critics.

3 thoughts on “Why does Meryl Dorey fear free speech?”