Let’s be clear about this. Censorship is the tool of the coward and so it comes as no surprise that anti-vaccination campaigners always attempt to suppress criticism rather than address it. Their most popular tactic is to abuse the Facebook reporting feature to get their critics kicked off Facebook.

There is a group on Facebook called Anti Vax Wall of Shame (AVWOS) which mocks and ridicules the absurd claims of anti-vaxxers on Facebook in public groups. So rather than simply ignoring AVWOS, or better yet refrain from saying stupid things in public. The anti-vaxxers have decided to play their trump card; Facebook censorship. 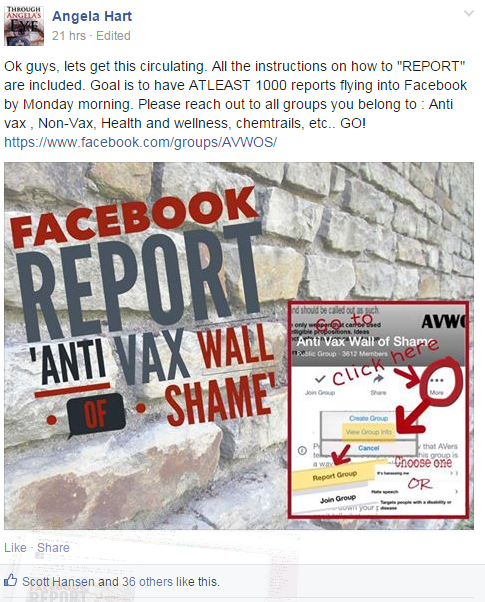 The plan is to bombard Facebook with complaints until Anti-vax Wall of Shame is removed. The anti-vaxxers have learned how to exploit Facebook’s automated tools and have a well established history of using it to silence anyone they don’t like. Of course if the plan doesn’t work they have a conspiracy theory all lined up ready to go.

When questioned by other members about freedom of speech they just repeat one of their favorite lies about critics.

You’re asking for proof from anti vaxxers? Good luck with that.

I really hope this is true because it will certainly be a lot of fun. The last anti-vaxxer to accuse me of hacking was ordered by the court to pay my legal costs. It should come as no surprise that lunatic conspiracy theorists don’t tend to fare so well in court.

Anti-vaxxers also oppose the use of virus scanners. For the love of all viruses.

Flooding Facebook with false complaints for the purpose of punishing your critics is harassment. This is a deliberate orchestrated campaign to have people banned from Facebook for daring to post screenshots that have been taken from a public group.

This is not the first time anti-vaxxers have resorted to these tactics and probably won’t be the last. It all started back in 2012. See: Why does Meryl Dorey fear free speech?