Last week I wrote about the Australian Vaccination Network repeating their comparison between vaccination and rape. Over the past week they have been been taken to task for it by the Australian media.

Daily Mail UK: Anti-vaccination group slammed after they compare immunisation of children to rape before claiming their advert is ‘just honest’

Of course rather than apologising for making the post the AVN simply denies having made it.

This is clearly an outright lie because the image was posted by the user/pagename avn.living.wisdom and the post stating “We do not own the page it was posted on” is the same page that posted the offending article. You can’t claim not to own the page page/account that you are currently posting to. That would be like me writing a blog post to explain that I don’t own this website. It’s just in my name, and under my management.

Of course the lying and back peddling doesn’t end there. The lie has also been repeated by Meryl Dorey who despite no longer being the official president; is still pulling all the strings. 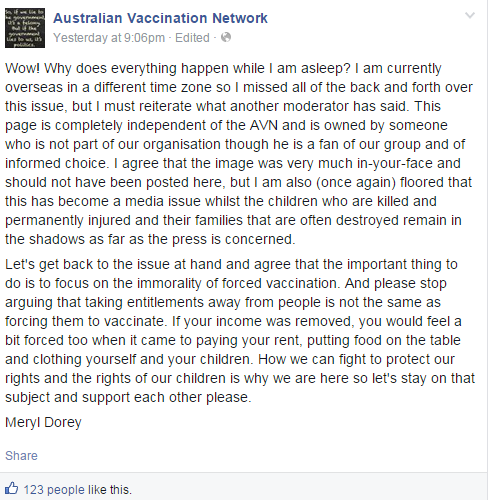 Seriously, if you’re going to claim not to own the page you could at least refrain from doing so under an administrator account on the same page. As for the claim “I agree that the image was very much in-your-face and should not have been posted here”. That’s a stark difference from a few years ago.

So what happened? In the past the anti-vaccination lobby would never have backed down in the face of a media shit storm. This time they go running for shelter and claim not to own their official Facebook page. They are of course no less vile than they were a few years ago, but their resolve seems to be severely weakened in the past year. This is surely I sign that we are gradually winning our campaign to prevent them from spreading fear, lies and hate onto the community.

Of course after five years (and a lawsuit) I’m not not in the least bit surprised that they have chosen to blame an anonymous individual who just happens to have administrator access, rather than simply apologise for making the post in the first place.