Last night two convicted Australian drug smugglers, Andrew Chan and Myuran Sukumaran were executed by firing squad in Indonesia. In response to the executions two hashtags #BoycottBali and #BoycottIndonesia have started to gain traction by people opposed to the death penalty.

I have been asking people to boycott the United States by deleting their Facebook and Twitter accounts since both services are based in California, a death penalty state. However rather than having the integrity to uphold their imaginary position on the moral high ground the left make endless excuses for continuing to use United States based service providers.

There is no such thing as “Defacto Abolitionist” California still has the death penalty on its books a long with 31 other states. In fact the United States has executed 10 people this year already without any moral outcry from Australia. Therefore expressing outrage over the execution of two Australian criminals to the point of boycotting the executing country only to then refuse a boycott of the United States over the death of ten US criminals is to place a higher value on the life of an Australian Citizen then on the life of a US Citizen.

The old “not as bad as” fallacy even makes an appearance from the left. 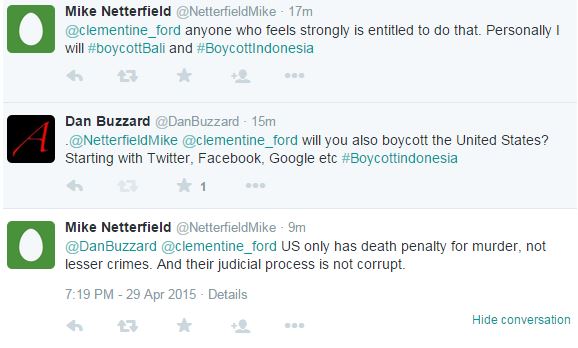 At least Andrew Chan and Myuran Sukumaran were guilty of the crime they were punished for. While their guilt doesn’t make the execution right neither does it make the Indonesian death penalty any better or worse than the US death penalty. If you’re going to boycott Indonesia for the death penalty then it stands to reason that you will also delete your Twitter, Facebook and YouTube accounts and refrain from using Google or watching Hollywood movies.

Unsurprisingly while the political left are happy to boycott Indonesia for the death penalty they will not boycott the United States because it causes them too much inconvenience. Some people only have principles so long as it’s not too hard.