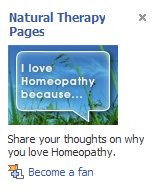 Have you ever noticed how much marketing hype exists around Homeopathy?

At first I thought is was all a joke. After all we don’t have fansites for Aspirin or Antibiotics. Homeopathy even has an Awareness Week. I have been asking the Homeopathy fans to provide some proof that Homeopathy works, however no such proof seems to exist. I once posted the following in a facebook thread “Since Homeopathy is diluted far beyond avogadro’s number non of the remedies contain any active ingredient as they are just water.” To which the response was

If you are not a believer, please move on… Let the people who believe in it practise it. -Satish Kethineni

I thought this was a fairly bizarre and non-sensical answer. All I asked for was some evidence to support the claims made by Homeopathy. Since when do you hold a belief in Medicine? However the most foolish response I have seen comes from Vikas Verma who writes.

I would suggest dear fellows not to divulge in any controversy , we don’t need to prove it , it is being practised in almost 88 countries with satisfactory results . Lets do our work with full commitment and let others waste their time in analysing our work if they wish so . Lets do the best & leave the rest . -Vikas Verma

My response if perhaps a bit brash

You don’t need to prove it because the scam is successful? Do you know how stupid that sounds. The fact remains that you con-men CANNOT prove any of your claims. Quit try to make pathetic excuses for you unethical business practices. –Dan Buzzard

To which Vikas Verma responds

U keep on analysing our success , we The homoeopaths will keep on moving forward and always thanks you for postive criticism .Your criticism helps us do even better .Thanks Buddy -Vikas Verma

The only success I acknowledged was their ability to defraud sick people. Did Vikas just acknowledge this. His English doesn’t seem too good; perhaps it’s a second language. So it’s difficult to 100% certain for what such a response might be implying. Even so such a response seems rather baffling, I expected him to at least provide some poor evidence for Homeopathy. Instead he claims skeptical scrutiny is somehow beneficial despite the fact that he is being exposed by it, this is a common response I get from people who are trapped in the corner without a rebuttal.

If homeopathy actually worked it would not need fans to defend it so rigorously. Real Medicine stands up to Scientific Scrutiny, it does not require a fanclub, it works. Homeopathy on the other hand does not stand up to scrutiny. It requires constant defending from fans and the frauds who use it. I invite everyone and anyone to email me with evidence that Homeopathy works and I will gladly retract all previous criticisms.

Thanks Bronwyn; that comeback made my day.

2 thoughts on “Homeopathy needs a fanbase?”