Janet Fraser is a “freebirthing advocate” from New South Wales who runs a website full of medical misinformation at JoyousBirth.info that aims to convince people that DIY child birth is a safe and reasonable thing to undertake. Janet Fraser views have already lead to the death of her own child in 2009.

In June of 2012 Deputy State Coroner Scott Mitchell declared Janet Fraser’s views on childbirth “extravagantly expressed” and “quite insensitive to the potential harm unassisted labour could cause”.

Ms Fraser, who runs the Joyous Birth website, had elected to have the “free birth” with only her husband Trevor Stokes and her friend Marianna Duce on hand throughout.

Mr Mitchell said Ms Fraser had not sought the assistance of any medical professionals in the lead up to the birth of her third child, electing to give birth in an inflatable pool in her home study.

There were no fluids, no drips, no cannulas and no emergency drugs to staunch bleeding, Mr Mitchell said. There was also no heart monitoring or resuscitation equipment for the baby or an oxygen mask for the mother. –Sydney Morning Herald

However despite the death of her own child and condemnation from the coroner Ms Fraser continues to run her Joyous Birth website to promote her ideas. 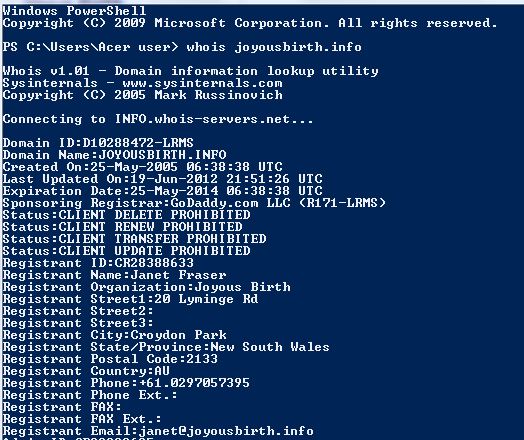 The Joyous Birth website was indeed registered to Ms Fraser on the 30th of June 2012 when I first queried the registration details of her domain name. However the next time queried the records on 29th August 2012, it appears Ms Fraser is now using an anonymity service to hide her ownership of the website. 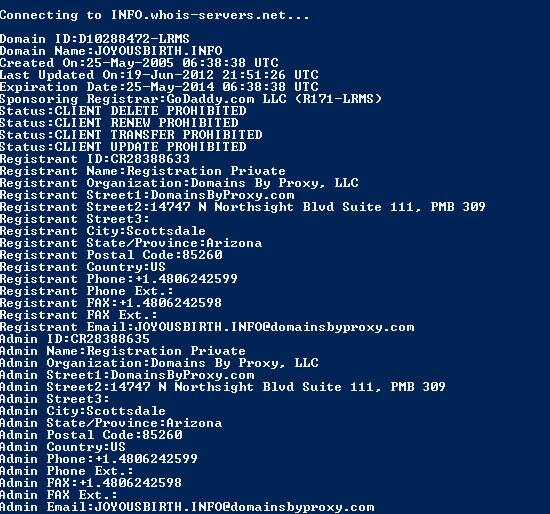 So Janet Fraser wants mothers to try her solution despite the fact that it killed her own child. She is also trying to hide her involvement with the Joyous Birth website. Is she ashamed of the misinformation she spreads? she should be. Although she certainly isn’t sorry otherwise she would pull the site down, or at least correct herself when she is shown to be wrong. I wouldn’t call the death of a child a “Joyous Birth”, but then I’m not Janet Fraser.