Oh dear, it looks like Australia’s leading anti-vaccination conspiracy theorist is upset with my attempts to get her to comply with government regulations. Meryl Dorey has setup a new section on the Australian Vaccination Networks website entitled “Dossier of Attacks on the AVN” where she whinges about all the criticism she’s been receiving as a result of her dangerous anti-vaccination ideology, and her failure to comply with government regulations. I found it very amusing that she decided to complain about my reporting her to the New South Wales Fair Trading.

Back in May 2012 I wrote to NSW Fair Trading to point out that the Australian Vaccination Network failed to comply with Section 41 of the ASSOCIATIONS INCORPORATION ACT 2009 (NSW). 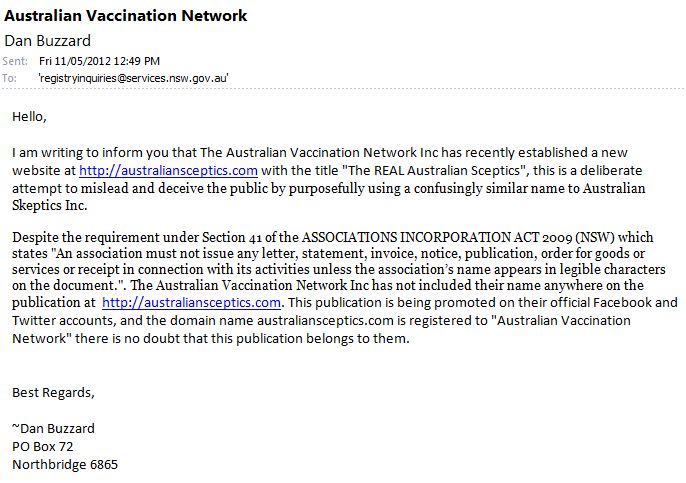 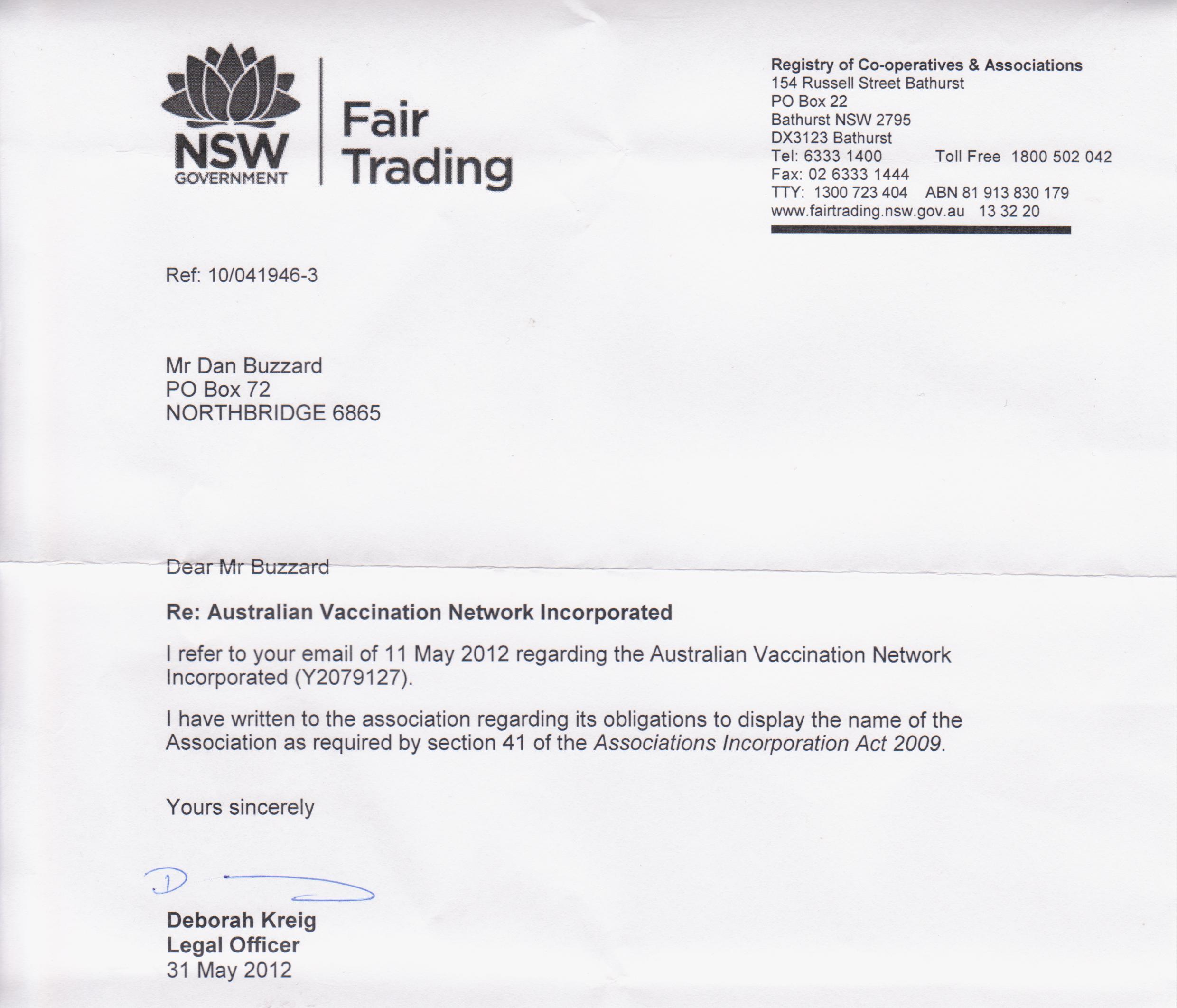 This blatant attempt to enforce the current regulations did not sit well with Meryl Dorey and she decided to include me in her “Dossier”. I take this as a sign that I must have done something right.

Dan Buzzard who is associated with both the Australian Skeptics and Stop the AVN, has been filing complaints with government authorities and writing to venues where the AVN was hosting seminars for several years now. The first image below is a letter he sent to the NSW Department of Fair Trading complaining about the fact that our RealAustralianSkeptics blog did not mention the Australian Vaccination Network. Well, the reason for that is that the blog is actually ON the Australian Vaccination Network’s website! –Meryl Dorey

Since Meryl is clearly suffering from massive butthurt I thought perhaps I could help her out. So I wrote a helpful letter and included a copy of the BUTTHURT REPORT FORM. 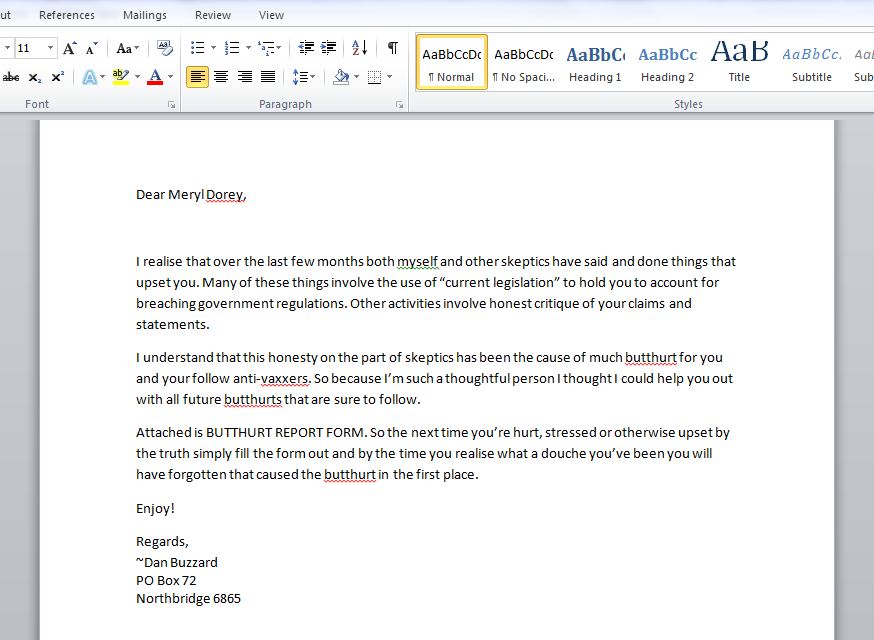 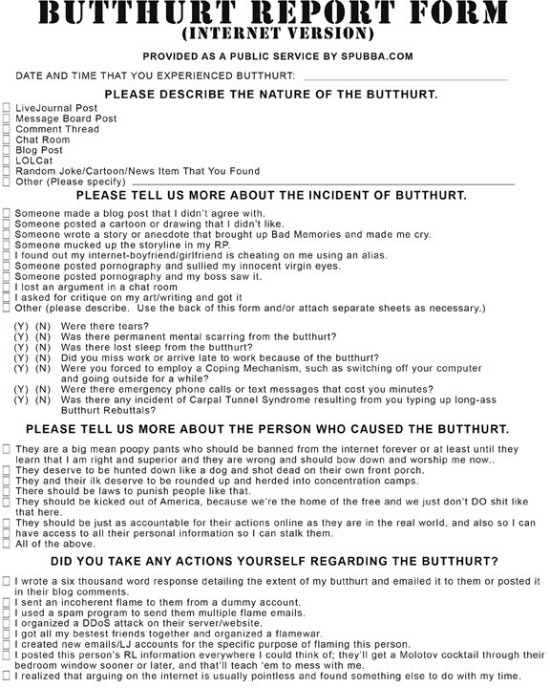 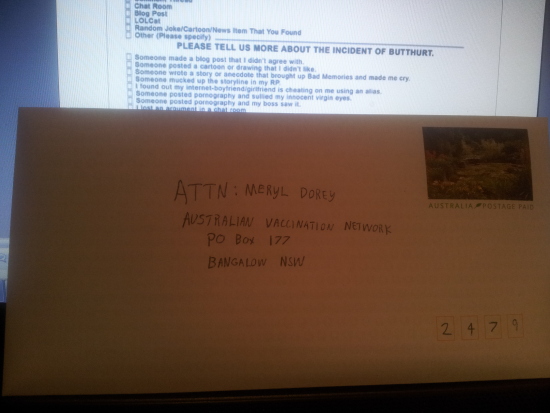 My handwriting, my reason for always typing letters.

I trust she will find my letter and attachment most useful. If not she will probably make another media release about it, but at least I tried.

In addition to mailing the Butthurt form I also decided to supply Meryl with more content for the dossier on me. I know Meryl likes homeopathy so what better than to direct her to evidence that I might have been rude to someone who sold the bogus medicine. Yes it’s the Cease and Desist I received.