So anti-vaccination campaigners are on the attack again in full force. This time they are attacking a physiotherapist in NSW by the name of Peter Tiernan. Going so far as to track down his employer and family members.

It would appear that Breana Elizabeth, Belgin Colak and Brett Smith from the Facebook group Anti-vaccine Australia have been stalking him for several months on the assumption that he is the man behind Reasonable Hank. 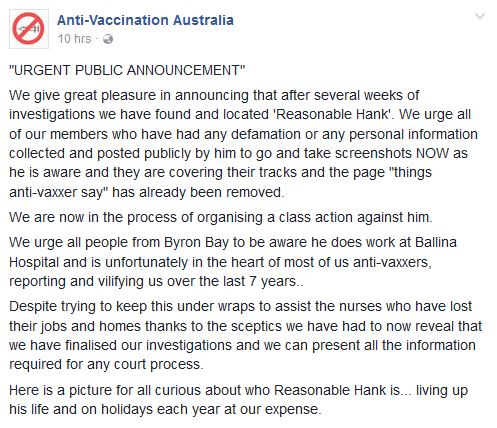 We give great pleasure in announcing that after several weeks of investigations we have found and located ‘Reasonable Hank’. We urge all of our members who have had any defamation or any personal information collected and posted publicly by him to go and take screenshots NOW as he is aware and they are covering their tracks and the page “things anti-vaxxer say” has already been removed. -Anti-vaccination Australia, 3rd November 2016

The Facebook thread then continues with photographs or Peter and his family members, including his children being distributed among the group. Several commenters have even expressed a desire to visit him at work. With at least one individual seeking his home address.

There is normally only one reason that anti-vaccination campaigners seek out their targets address and it’s not the send a Christmas card.

Those of us who have had to deal with anti-vaccination thugs for the past few years have become accustomed to hiding certain information about ourselves. However in this case the victim had no reason to ever expect that he would suddenly become the target of such a hostile mob. As a result much of his personal information was readily available on his social media profiles which the anti-vaxxers then raided.

So what has Peter Tiernan done to incur the wrath of the anti-vaccination movement?

All this is because his name just happens to look a little to similar to their desired target.

So no, Hank, in a crafty bit of wordsmanship altered his name from Peter Tiernan to Peter Tierney. Nice one Shank. nudge nudge wink wink. -Brett Smith, 2nd November 2016

I can categorically state that the man being targeted here is not Hank, nor does he have any connection with SAVN. However the anti-vaccination movement is not known for intellect only its vileness and this type of behavior is far too common.

A special shout out to the great detective work of Breana Elizabeth and Belgin Colak who have worked tirelessly over the last few months with me tracking this slime ball’s every move. It’s time for us all to focus on the real enemy here, Bad Pharma, and unite a movement that will need cohesion and unity to defeat the multi billion dollar Pharma machine and their toxic media and political buddies. -Brett Smith, 2nd November 2016

Stalking, menacing and harassing is currently illegal within all states of Australia. So is inciting violence towards another person. It is my hope that the perpetrators of this latest harassment campaign will be dealt with under the law. They are certainly not shy about admitting to their actions.