Chris Savage is a prominent anti-vaccination campaigner and former sergeant in the Queensland Police Force prior to being thrown out for reasons Qld Police have not disclosed. I will however speculate that they probably didn’t want someone who thinks it’s ok to randomly shoot people at your own leisure. 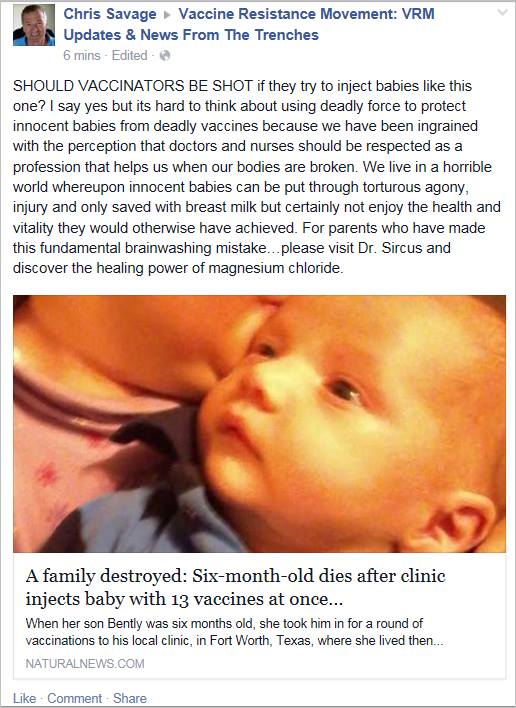 Of course this is not the first time Anti-vaccination campaigner have praised murder as a legitimate tactic. Back in Febuary United States based anti-vaxxers openly praised the murder of medical personnel.

In September of last year a leading anti-vaccination campaign tried to convince a woman to kill her own husband via deliberate dissemination of false medical advise.

Way back in 2011 calls to “String the Bastards Up” where made by anti-vaxxers advocating the lynching of medical personnel. Then there is the unforgettable Frankie Vazquez who issues both bomb threats, death threats and more.

So while we are used to anti-vaxxers engaging in threatening and criminal activity it is not often that we have Former Police Offices engaged in such activities. Chris Savage actively promotes himself as a former police sergeant to garner credibility within anti-vax circles.

I will be interested to see what Queensland Police have to say about this. They kicked him out, but he still uses their brand/reputation to promote himself.