If you’ve seen the news lately then you’ll know that the Abbot government has recently announced plans to strip anti-vaxxers of welfare payments for refusing to vaccinate their children.

Australian parents will lose thousands of dollars of childcare and welfare benefits if they refuse to vaccinate their kids.
The “no jab, no pay” plan, announced by the federal government today, has bipartisan support. Thousands of families could lose payments, with the government estimating about 39,000 children under seven have not received immunisation because their parents are vaccine objectors. But Social Service Minister Scott Morrison said it’s not fair for taxpayers to subsidise parents who choose not to immunise. –The Australian

Australian welfare payments have certain conditions that must be met before you can claim a hand out from the taxpayer. For example the Disability Support Pension is only available for people who have a disability. Student welfare payments, called AusStudy in Australia can only be claimed by people undertaking a “full-time study load” who do not earn money via paid employment. While people claiming the New Start job seekers allowance must be looking for work.

Other welfare payments such as The Family Tax Benefit part A and the Child Care Benefit. Also have requirements that need to be met before a person is eligible to claim the benefit. In this case it is a requirement to immunise your children to be eligible for payment. However there was a loophole that allowed parents who neglect to vaccinate their children to still claim welfare payments despite not meeting the eligibility requirements. However there was an exemption in place that allowed people to claim “Conscientious Objection” to vaccination that would allow them to claim welfare payments despite failing to meet the immunisation requirements.

For years, anti-vaxxers have claimed “Conscientious Objection” to life saving medicine in order to claim a welfare payment they do not meet the requirements for. This is welfare fraud, albeit a legal one. The government has now closed this loophole to prevent tax payers money being spent on people who wish to endanger the community.

Unsurprisingly the Australian Vaccination Network, an extremist anti-vaccination lobby group that is no stranger to committing criminal acts. Is now encouraging members to partake in a “Phone Jam” whereby they attempt to flood the phone lines of Social Services Minister, Scott Morrison. 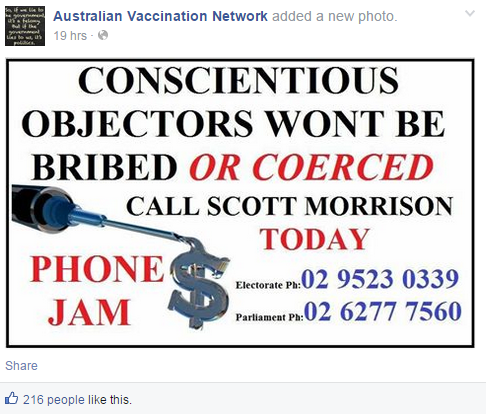 The idea was first posted on No Vaccines Australia with the stated intention of clogging up the phone lines. 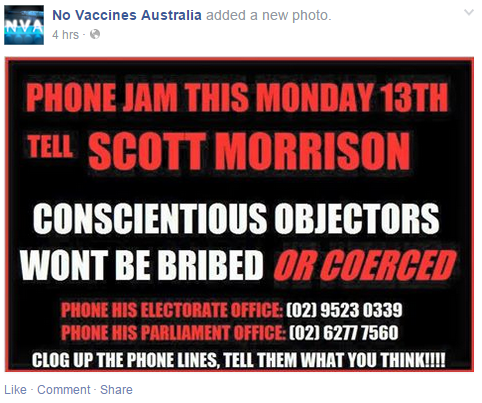 However attempting to “Clog up the phone lines” is a crime in Australia as it is in effect a Denial of Service Attack.

(a)  the person causes any unauthorised impairment of electronic communication to or from a computer; and

(b)  the person knows that the impairment is unauthorised; and

(c)  one or both of the following applies:

(i)  the electronic communication is sent to or from the computer by means of a carriage service;

(ii)  the electronic communication is sent to or from a Commonwealth computer.

This is only a small list of abhorrent or at the very least, questionable behaviour that I have documented on this site over the past 5 years. I know there is a significantly enormous amount of bad behaviour that I haven’t written about yet. Mainly because I haven’t had the time to write a whole encyclopaedia.